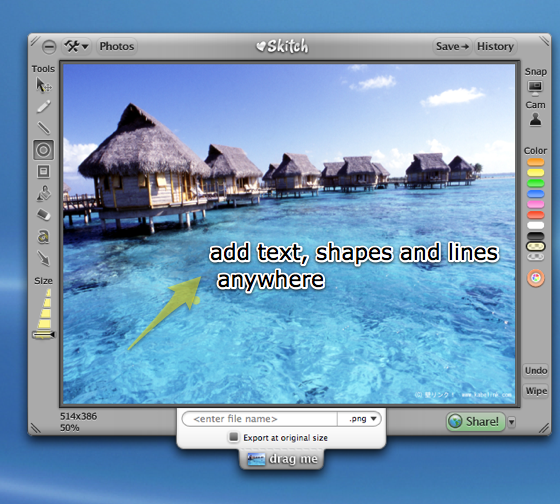 Most bloggers, and lots of others, spend a lot of time manipulating images for posts, sharing, etc. Personally, I use Photoshop, which is way more horsepower than I need since I generally just grab, mashup and resize images. But it still works far better, and far faster, than any of the online image editing tools we’ve reviewed.

Today I tested a new desktop application, called Skitch, that works far better than Photoshop for basic grabbing and editing of images. And it also has an associated online account for storage and sharing with others. For now, it only works with Mac (and is still in private beta), but a Windows version is in development. All of the images included in this post were grabbed and edited using Skitch, and it saved me a ton of time v. Photoshop.

The desktop application is a small, resizable window. Drag an image into it from the desktop, another application (like iPhoto) or from a web page and it presents it for editing. Alternatively, Skitch include an excellent screen grabbing tool that also automatically pulls it into the window for editing, or it will access the built in camera and snap an image. Most file formats are accepted (jpg, gif, tiff, png, etc.).

The editing tools include adding lines, free drawing, arrows, and text. Images can also be cropped and resized by dragging and dropping. Once complete, the image can be named and saved as a jpg, png, pdf, svg or proprietary format (no gif or tiff for now), uploaded to your Skitch page or dragged to the desktop or other application. Skitch also keeps a history of all files edited.

Images that are uploaded to your personal Skitch page (called “MySkitch”) can be commented by other users, and there are a number of options to embedded that image in other websites. See the screen shot above and to the right for an example. MySkitch also allows hotlinking of images, subject only to restrictions on “excess use.”

See the demo video to get a better idea:

Skitch is still in private beta, but they have agreed to give the first 1,000 TechCrunch readers an account. They say they won’t be ready to give the accounts out until next week, but send your email now if you are interested to techcrunch@plasq.com. Remember that it works only on Macs for now. You can also sign up for an invite on the Skitch website.

Skitch was created by the startup Plasq (with employees in USA, France, Norway, and Australia) which is known for making incredible Mac software. They are also the creators of the hugely popular ComicLife, which is a built-in application on all Macs, and Apple pays them a license fee for every Mac sold.

The company has not raised any capital – Plasq’s founder and CEO Cris Pearson told me today that “bundling of ComicLife with Apple was a big help. almost like raising venture capital without the dilution.” Given how many Macs have been sold lately, I’m in agreement. And something tells me he has another winner on his hands.