A few more details on the latest Danger device have trickled through and hit the Giz. Remember the Sidekick RAZR X PowerPoint slides that made the rounds a while back? This could possibly be the device I’ve been waiting for, but I thought that about the Sidekick 3, too. Sidekick 4 this is not, but, rather, another ‘interim’ device (iD ring a bell) until the Real Deal Holyfield is released. The specs look fairly impressive, but it still has a long ways to go before fanbois like me will be satisfied. 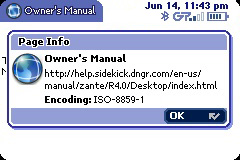 Still no video playback and the same crappy 1.3-megapixel camera, but it’s a lot slimmer than the Sidekick 3. I’m not sure how I feel about a sliding keyboard as opposed to the swiveling keyboard the Sidekick is known for, either. I’m so confused about what my next phone will be now. It hurts my brain.

More on the Sidekick Slide [via The Gizza]