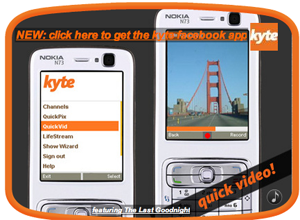 Kyte.tv, which is at its core a media player for personal expression, lets users send a stream of personal information to their friends: drag photos, video and text into the channels and interact with people viewing your content. In our launch post on the service in late April, I described it as falling somewhere between Twitter and Ustream, although Kyte has additional features as well.

The company is based in San Francisco, and raised $2.25 million in an initial round of financing in July 2006. Over the last several weeks they’ve brought on more investors. Swisscom and Holtzbrinck Ventures were announced in May. This week they also announced that Nokia invested in this round.

Kyte Founder Daniel Graf says his company intersects the three fastest growing areas of the Internet right now – social networking, user generated content and mobile. The mobile angle is crucial – whoever corners that market first with a compelling social application stands to gain ground easily. The Nokia and Swisscom investments will certainly help them there.

Kyte continues to evolve the product as well. They just rolled out a Facebook application that gives Kyte users another way to show off their content to friends. And they’ve inked a deal with EMI’s Capitol Records to allow users to add music for free (and legally) to their creations. Users can create a video or photo show with their webcam, add music and publish it in an instant. Graf also says that they will soon offer a cobranded Kyte solution for Swisscom mobile customers.

The company is moving aggressively to evolve its product, and I like that. This is one of those applications, like Twitter, that could sort of float around for a while and then take off suddenly when a tipping point is reached. With solid venture backing from Silicon Valley and European first tier financial and corporate investors, they can attack two large markets at once. I’m bullish on them.