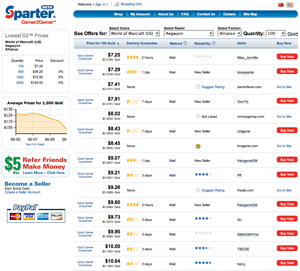 Sparter, a stealth startup founded by Bessemer Venture Partners, launched this evening. They are jumping into the middle of the estimated $1 billion market for buying and selling virtual currencies in games like World of Warcraft (WOW), EverQuest, Eve and others. The current spot price of 100 gold on WOW? About $10.

The company is a true person to person trading company. Users can sign up and either buy or sell virtual currencies at market prices. There are already a number of sites that sell these currencies directly to users (IGE is the largest), but they don’t take sellers, just buyers. And the prices are set by the company, not the market.

I spoke to Dan Kelly and Boris Putanec, the two executives Bessemer brought in to start the company, earlier this week. They say that a major supply of WOW gold today comes directly or indirectly from “farmers” in China and India. People are paid a very low wage to play the game and gather small amounts of gold, which are then sold directly to players or to services like IGE. Those models are fine, they say, for people who want to buy currency. But it gives no way for people who want to liquidate their virtual gold into real world money.

eBay is one place where gamers currently try to trade virtual currency for real money, but the company started restricting the sale of virtual goods on the site earlier this year, and proactively removing listings that include virtual money and other items. Sparter is simply filling the void that eBay has voluntarily created, the company says.

Others note that eBay left the market due to trademark and other concerns. In particular, it is a violation of the terms of service of many of these services to exchange currency in this way. Whether these virtual worlds will turn a blind eye to Sparter’s activities, or attempt to fight it, remains to be seen.

Sparter acts as the go-between for the parties, keeping payments in escrow until both sides say the virtual transfer went through properly. Users are also asked to rate each other after a transaction. Users with higher reputational ratings may be able to charge a premium.

The company only supports trading in currency for now. Other digital goods cannot be traded on the platform. They say they have no plans to deviate from that strategy, unless users show strong demand down the road.