Note: During Steve Jobs’ WWDC 2007 Keynote, this post will act as a static front page for CrunchGear. The rest of the site is accessible via direct link. Once the keynote is over, we will revert to to standard format.

Matt is in place and ready to rock and roll.

9:53: Hey Sportsfans. I’m here at Moscone Center in lovely and chilly San Francisco. Things are about to get started. Right now, there’s some Dave Matthews playing. You’d think the man who spearheaded the digital music revolution would have better taste.

9:58: 2 minute warning. Someone asked us to turn off our cellphones. like, yah. sure pal. I’m a JOURNALIST.

9:59: They’re cranking the Green Day. Still a blank stage with a couple macbooks.

9:02: nothing yet. I note it’s almost hard to see over the tops of the heads of the podcasters. They’re all in front of teh real media. Whatever. Jerks.

Johh Hodgman is on screen as steve jobs

hodgman’s digging on the zune

saying he (as jobs) is closing down apple, cuz vista is so awesome

justin long showed up and told him to shut up. duh.

10:05: Jobs is talking about intel and how last year it was the big deal

EA is coming back to Mac as a gaming company

harry potter & the order of the phoenix comes to mac

I think the EA CEO is kinda drunk

the harry potter game looks dope. the crowd likes it. 2 minute demo of game. EA sports coming to the Mac in August

all the EA games, sports and otherwise

Next up, id software

it’s cool technology, works great in OSX
makes the mac a “really fantastic gaming platform, as it should have been”
they just finished up 10 days ago

AND it’s synced with stacks

10:22: holy cow, the new dock is AWESOME – it reflects what’s above it. it fans out when you click on it. he’s showing movies out of stacks – and has a grid view – stacks is sort of a smart folders, but really smart. self-organizes

10:23: he’s showing off core animation aspects, which we’ll come back to – oh no! No more brushed metal!

Above – the new interface with stacks.

10:29: you can even browse through multiple pages and preview video

you can use coverflow to browse all macs on your network

Back to core animation: layers, GPU accelleration is automatic – oh man, it’s amazing: a wall of videos all playing at once – preview multiple videos at one time

coverflow through them in real time

group applications into seperate spaces, and switch back and forth. blah blah.

showing off different ways to organize – spaces is cool. game running in one space – audio only comes on when space is active. nothing outstandingly new here though

WebClips – he goes to yahoo – likes the main Yahoo page. Grabs it. auto-finds parts of websites, probably via RSS, and right clicks to “make widget” he’s on rotten tomatoes. shows movie ratings – highlights it, goes to “make widget” – soit pulls the data from any website and puts it into a widget. neat

photobooth effects in ichat – ichat theater and backdrops – these are FEATURES? gah!

10:58 – I’ve been asked not to stand up anymore, lest I should be asked to leave

10:58 – iChat – new animated backgrounds – it takes out the background, adds in a movie – fishtank, waterfall

backup to to local hdd, network, wirelessly – plug a my-book drive into an airport extreme, sync all your macs at the same time via airport

but one more thing! safari – safari’s marketshare is at 5%

fastest browser on a PC – 2x faster than IE

steve boots into windows for the demo – says, “huh. this is odd. ok, start menu…” – showing off safari and it’s … safari

half a million downloads of firefox a day

safari 3 to be built-in to the new downloads of itunes – ummm? bundleware? feh!

it’s based on safari for iphone – full safari engine – built in AJAX and web 2.0 – iphone image on screen has only 11 icons, btw

no SDK needed – sandboxed on iphone – just code the ajax/web 2.0/whatever

and add the iphone code for phone numbers, etc. – new iphone app showing how they made it – 3rd party apps will run IN SAFARI – not under the OS

Now we know why the Windows Safari – it’s all about Write-Once-Run-Anywhere – Cool? Hot? Hrmm…

they made an ldap lookup program for the apple orporate directory

safari integrates with the iphone’s hardware – add a “dial” tag or wahtever to someone’s number in your database – when tapped, it dials, etc. – works with google maps

ah, you can use multitouch in your safari apps, too 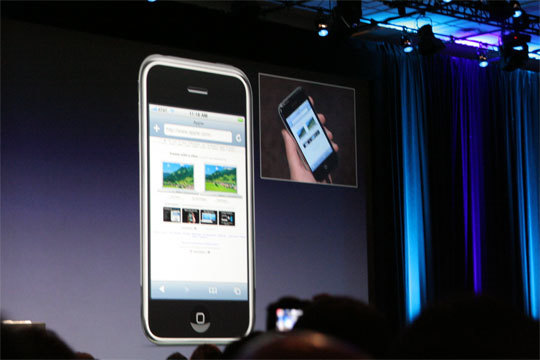 making a big push to make safari a platform

that’s it, we’re done – my battery is about dead. Questions? Yeah, Steve. Can you make MacBook batteries last longer?

All done! Thanks, everyone!