Wyzo is a new company with two products. The Wyzo browser is built on the Firefox core and comes with a BitTorrent plug-in called FireTorrent built in. For those not interested in a separate browser, a standalone version of FireTorrent is available for Firefox.

The primary target audience for Wyzo is people who don’t already use BitTorrent. The Wyzo team don’t anticipate that the product will be appealing to heavy BitTorrent users. Instead the company is focused on reaching out to those users that don’t know what BitTorrent is or how to install a Firefox extension by offering them a standalone browser where everything is already set up and working for them.

Downloading content with FireTorrent (both from Wyzo and Firefox) is remarkable only for its simplicity; visually it looks identical to downloading any regular file in Firefox.

The module itself is built upon technology provided by P2P Innovative and supports features such as uTorrent compatible fast peer exchange, STUNT and uPnP connection integration.

There’s a number of existing BitTorrent add-ons for Firefox including FoxTorrent which we covered in April. In downloading legal content I found nothing particularly different with FireTorrent, it’s simple to use, fairly quick with downloads and perhaps surprisingly for an Alpha release, it was stable under Vista.

The offering of an actual branded web browser though is different. There will be many people reading this thinking that building a standalone browser is a stupid idea. To those people I say: you’re not the target audience. This is a package my mother would like. It’s for an audience who doesn’t read TechCrunch and who wouldn’t know BitTyrant or Firefox add-ons to save them. It should be remembered that there is a real and actual market for standalone browsers: there’s very little in Flock that can’t be done with Firefox add-ons and yet today Flock has in excess of 250,000 users. Simplicity can be a strong selling point. 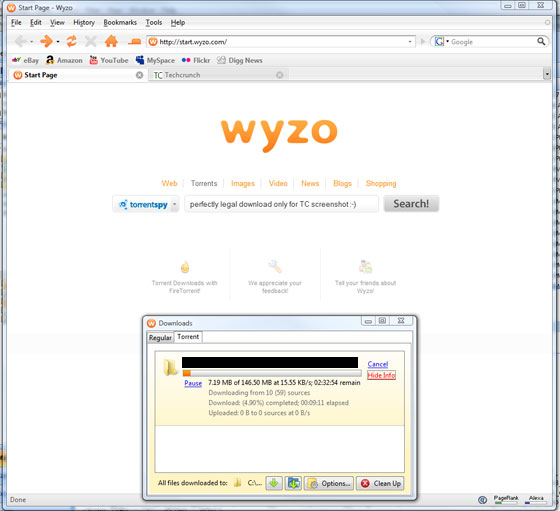