The hardest thing for a Windows user wanting to make the switch to Apple is having software and games that won’t run on a Mac. Likewise OSX is deficient as a gaming platform.

Parallels has long bridged the Windows/ Mac divide by providing Windows support from the Mac desktop. The upcoming version of Parallels, Desktop for Mac 3.0 bridges the gap like no release before it.

New features include “SmartSelect” that lets users assign any OS X or Windows application as the default for any Mac or Windows file type. Mac converts no longer need to open a Windows program manually to edit files. Windows applications can be set as the default program for Word documents or any other file type. As Ben Rudolph, Parallels’ Director of Corporate Communications puts it “this is total OS integration on a file and application level”.

3D Graphics including DirectX and OpenGL support is now fully supported within the virtual Windows machine bringing the vast library of Windows games to the sparse Mac gaming desktop. As the screenshot below shows, this includes titles such as Quake 4.

As a Windows user one of the biggest things holding me back from making the switch to a Mac (aside from the price of the hardware) has always been the potential switch over cost in having to acquire Mac versions of my favorite apps or as the case may be having to do without because there is no Mac alternative. For $79.99 the new version of Parallels makes a Mac that much more appealing.

Desktop for Mac 3.0 will be released in June.

Update: CrunchGear is running the rumor that Apple will start selling Macs with Vista included. If they chucked in Parallels instead of Bootcamp it would be a better offering again. 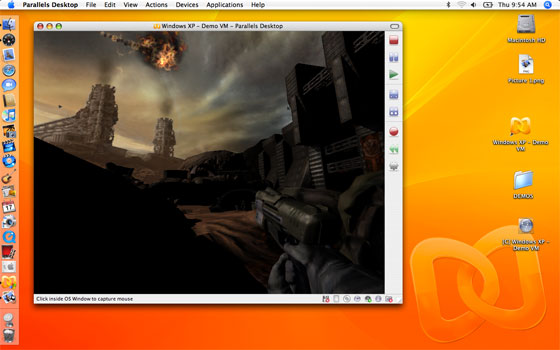