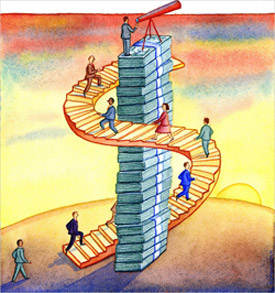 Open source is all well and good, but what should happen to all the money that’s generated in its creation? A very good question, and one the New York Times tackled today. Told against the backdrop of a failed presidential campaign and the spirit of the grassroots movement, the article looks at the success of the Mozilla Foundation and its Firefox Web browser. The non-profit group’s browser has been downloaded an estimated 75-100 million times, representing 15 percent of the market. Moreover, some 1,000-2,000 people have contributed actual code to the browser, with many more having beta tested it.

Nobody knows, that’s what. Who should get what, and how much? How many lines of code do you need to have contributed to receive any sort of reimbursement? Weren’t all those guys on Slashdot during Firefox’s early days (as Phoenix) just happy to contribute to something anti-Microsoft? And who could forget when Google gave Mozilla all that cash in exchange for prominent search bar placement? How involved, really, is Google in Firefox development?

I don’t know, I just found the piece interesting. It asks important questions not only of Firefox, but of the open source movement as a whole. Add to that charges that Firefox is getting bloated with new features with seemingly every major release and you can appreciate the article even more.

Firefox and the Anxiety of Growing Pains [New York Times]