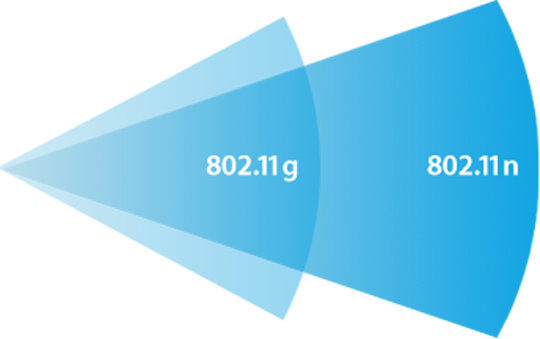 It seems like only yesterday that 802.11g was burning up the airwaves. Today, 802.11g is the de facto standard and n, which ideally offers 242 Mbps but really offers around 50 Mbps. 802.11n also boasts increased range and quality of service, something that home video and audio streamers will just love. But is it ready for prime time?

To test the current crop of 802.11n devices, I installed an Apple Airport Extreme, a Buffalo Wireless-N Nfiniti base station, and a Buffalo Nfiniti PC card. I tried out a few devices, including the Nokia 770 web tablet, a wi-fi enabled phone, a wireless TiVo adapter, Apple TV, and an old Linksys wireless bridge that I’ve been using for about 2 years to connect my basement machines with the cable modem upstairs. 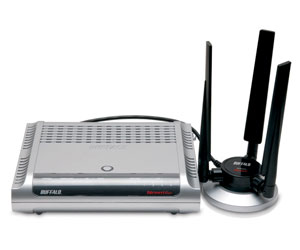 Because I do not have a proper test facility here at CG headquarters — or even a properly measured range testing system — I won’t add formal statistics to this article. You can find those on multiple sites around the web but trust me — as a former technical editor for a laptop magazine that shall remain nameless, most statistical analyses of routers and other devices are fraught with error and/or interference. No one has a Faraday cage in their testing labs except, maybe, PC Magazine. But they use that to keep the records on all of the reporters and analysts they lay off. But I digress.

My favorite intra-network test tool is iPerf, a client/server based performance tool that is completely cross platform. If you want to test speeds between computers — essentially testing your intre-network speed, it’s one of the best tools out there.

I can say that on my pure 802.11g network I was seeing through put of about 20-30 Mbps. This fluctuated depending how many devices I had connected to the network and the status of our baby monitor. For example, my intra-network today was about 10 Mbps while my speed to the outside world was about 5 kpbs due to problems with my cable modem, giving me an effective speed of “Wow, my network sucks today.”

When I installed the N gear, I knew I would be dealing with similar issues. I replaced my main G router with the Airport Extreme Base Station and bridged my Mac Pro using the Nfiniti router. I unplugged all of my wireless G and B devices and connected the PC card to a Windows XP laptop. The internal network read about 80 Mbps, a fairly good speed, all thing considered, and a large improvement over the G network.

The mixed G network, however, was a different story altogether. Because of the vagaries of security, reception, and drivers, the mixed network dropped down to about 50 Mbps between N devices and hit about 20 Mbps between G devices. The takeaway is this: if you need maximum wireless speed within a closed environment using similar hardware, 802.11n is for you. If you’re running a mixed network, pick up 802.11n by accretion rather than immediate upgrade. You can get a PC card here and a router there until your entire network is N-based. Otherwise, the boost in speed is negligible.