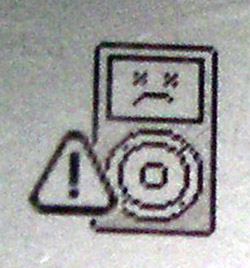 All credit to Wired‘s Leander Kahney, for he and he alone knows how to fix the iPod. You know, the iPod that rejuvenated Apple, helping transform it from Apple Computer to Apple, Inc. It seems Kahney thinks that there’s something& mdash; some things — wrong with Apple’s portable media player. They “bug” him. Watch out, world, Kahney’s on a tear.

• Apparently, the menu scrolls the wrong way. Quick, someone telephone Apple’s incompetent industrial design teams because their design is wrong. According to Kahney, the menus should scroll up and down instead of sideways. “But to back up the menu tree, you must hit the “Menu” button at the top of the scroll wheel. Instead, I instinctively hit the “Rewind button” on the left hand side of the scroll wheel, which is the wrong button.” There it is. Because he keeps hitting the rewind button Everyone Else must surely do the same. Hence, the iPod’s broken.

• The menu doesn’t wrap and you can’t scroll backwards through the alphabet. Since he insists on choosing songs by going the long way—music, artist, album, song—it takes him a long way to get to White Zombie. I guess creating a playlist called “Lame Music” is too much to ask. Broken.

• There’s no autofill for larger iPods. Well blow me down that is a huge problem. In no way should Apple expect me to make playlists of my choice, smart or otherwise, to fill my iPod with. I want iTunes to fill it automatically with my “tunes.” Broken!

What a load of hogwash from Kahney. Why is it that because he gets confused by the iPod’s menu structure or can’t get over the fact the iTunes isn’t automatic enough for him he needs to inform the world. I’m sure Apple is listening. His lone, howling voice is coming across loud and clear.

Three Little Quibbles About the IPod [Wired – Cult of Macintosh]