An avid gamer since his youth, author Steven L. Kent has seen the evolution from flat 2D arcade games to epic non-linear 3D adventures. Kent talked to CrunchGear for the second part of our series on video game violence and content.

For more than a decade Kent has been the video game industry’s most prolific writer to date. His work has appeared in dozens of magazines and Web sites. In 2000, Kent self-published The First Quarter: A 25-year History of Video Games. That book was later purchased and re-published as The Ultimate History of Video Games by the Prima, Three River Press, and Crown divisions of Random House.

In 2005, Kent announced his semi-retirement from video games so that he could concentrate on writing novels. Though he still writes a monthly column for Boy’s Life, he has mostly concentrated his efforts on writing novels since that time. His first efforts in science fiction, The Clone Republic and Rogue Clone were published by Ace Book in 2006.

Crunch Gear: Since you first started covering video games, would you say that violence and other “adult” content has increased?

Steven L. Kent: Sure they have. When I got started, Pac-Man was still a big deal. When the fighting games came in, people considered them violent. Back then, people were concerned about violence, not adult content. Adult content is a much newer phenomenon brought on by more storage space–resulting in cut screens and voice acting — and better graphics — resulting in more realistic depictions of violence, sex, ect.

Also, the audience has aged. When I got started, SEGA had just announced that its audience had an average age of 15 and Nintendo disputed that research as absolutely impossible. Now the average player is in his 20s–supposedly.

CG: As a parent, are there games that you wouldn’t let your kids play? And do you the think the number of titles of matured-themed content is on the rise?

SK: There are games I would not let myself play. Look, I am very involved in my church and take a fairly puritanical stance on what my children can and cannot play. I also wholeheartedly support the rating system. When I tested Grand Theft Auto: San Andreas, I could not play it when my children were home.

I did not especially love the original Mortal Kombat, but it was fairly unique in its day. Today the industry if rife with games I would not let my kids play, big deal games and small games that pass under the radar. If you want to know how games have changed, look at the original Leisure Suit Larry and compare it to the last one that came out a few years back. 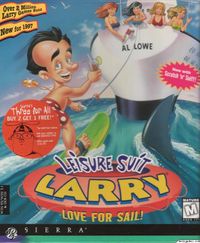 There is a compendium of all things Larry in case you are not familiar with the originals.

Media, not just games, have become more and more explicit. I think that is the nature of entertainment media. There was pornography as soon as there was cameras and silent film pornography existed nearly 100 years ago, but proliferation of adult content is the direction that media industries seem to take.

CG: Obviously games today look much better visually than they did a decade ago, and we’re only bound to see even more lifelike games. Is this going to make the violence even more realistic?

SK: I think I have addressed this. Better graphics does not need to mean more realistic violence, though that will be the most common result. Better graphics can also mean better depictions of comic book violence.

CG: And over the years, especially as the video game industry launched their own trade show with E3 (Electronic Entertainment Expo); do you think that the more violent games have become the high profile games?

In truth, I found Manhunt to be a brilliantly executed game — pun intended — just thoroughly depraved

CG: Besides violence, it seems that gameplay has become more immersing. And where the stories were once as two dimensional as the graphics, today’s games feature very deep stories and the developers should be praised for crafting these tales. But has some of the subject matter of these games reached a point where many games should really be adults only – and not in terms of violence or sex, but also because the content is explicit in other ways (characters that commit crimes is a good example)?

SK: First of all, let me say that I cannot for the life of me understand why we have an AO rating if the ESRB is so scared to use it. What’s the use of pulling a gun on a burglar if you then show yourself unwilling to use it — you might as well not have the gun in the first place? I am afraid that the ESRB created the AO rating for the sake of impressing Senators, not labeling games.

As to the storylines in games, few games have impressed me. The GTA games are strings of events, not stories. I think Ubi Soft has produced games with interesting and well thought stories. Square Soft constantly pushes the envelope. Valve (Half-Life) and Looking Glass (System Shock), I think, deserve the most credit.

CG: There has been criticism from some groups that mature rated titles are marketed to kids, do you think this has been case? One example that comes to mind is that many games appear on the cover of a video game magazine months before that title ever gets a rating. But shouldn’t the developer have an idea of what that rating could be?

SK: Look, I think kids hear about adult-oriented games and the industry does little to nothing to discourage that. There is lip service and an excellent rating system. It’s not just games. R-rated movies, M-rated games, songs with explicit lyrics — they all are the subjects of school yard conversations. I wish the industry would take more responsibility. But we started this conversation with you asking me about games I would not let my children play… I wish parents would take more responsibility as well. I think things are falling apart on both ends and until parents return to playing a more active role in their children’s upbringing, there is nothing that Congress or game companies can do to make things right.

CG: It seems to me that reviewers (and I’ve been a game reviewer for nearly 15 years), tend to spend a lot of time addressing the pros and cons of a game, but say very little that it probably isn’t appropriate for certain age groups or those who might be easily turned off by the content. Is this a fair view of the state of video game reviews?

SK: “I look at Grand Theft Auto: San Andreas, a new urban crime role-playing game for PlayStation 2 created by Rockstar Games, about the same way I might view gorgeous graffiti painted on my front door. No matter how artistic this game may be, I do not welcome it.”

This was how I began my review of GTA: San Andreas. The game industry gave me no heat at all over this but the ratings and decency crowd called me a coward.

I finished by saying: “As a game, San Andreas is ethically reprehensible. The language in this game is so filthy that I could not play it when my children were home. The missions and morals are even worse. The gameplay and storytelling, however, are beyond brilliant. Much as I hate this game, I see it as a work of art.”

I was accused of selling out. Dave Walsh in the National Institute on Media and the Family quoted me and stated that such reviews were like giving a restaurant a five-star rating then stating as a footnote that the food was poisonous. He said these reviews only served to wet young people’s appetites for the game.

I think that most game reviewers are hardcore gamers first, and that they are not bothered by content issues in the way that I was and still am. They are being honest; and if they are being honest, than they are doing their job. I was honest, and I felt I did a fair job.

In the end, I think Manhunt, and Leisure Suit Larry, and even Custer’s Revenge deserve to exist, so long as they are marketed properly and there is a market for them. I would dearly love to see them go away, but I would not like to see the rights of people to express their thoughts — even their demented and violent thoughts — in a non-harmful environment. So long as no actual people were killed in the making of Manhunt, then it has the right to exist. If people do not buy it, then it will not be funded and its creators will find other ways to express themselves. In a free market/free society we should support that.

As reviewers, we have a responsibility to say first and foremost if a game is good. After that, we have to report what we see as important. For me, moral concerns fit that bill.