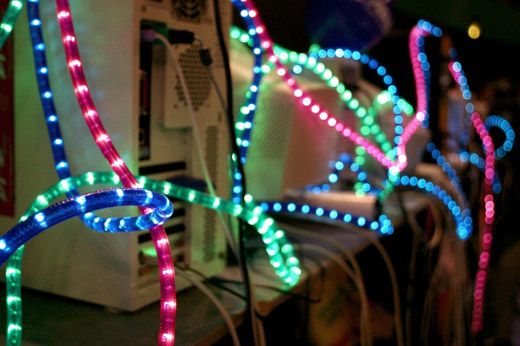 It was the blinking of the hideous lights! Computerworld’s Mike Elgan is angry at gadget manufacturers who put silly, useless lights all over today’s gadgets. Computer monitors have lights to tell you they’re on; routers and modems blink incessantly whenever they’re plugged in; BlackBerrys and other cellphone blink seemingly whenever they feel like it. Enough! In response to this madness, Elgan came up with a Gadget Bill of Lights, wherein he lists several theses on how this gadget light pollution should end. And they are, in summary…

1. No more lights that flash at night

2. LEDs should all be able to be dimmed

3. Lights should only flash for a reason, not because it looks cool

4. Lights should have an on/off switch

Do you get it? Stop it with the lights already!

We the people demand a Gadget Bill of Lights [Computerworld]