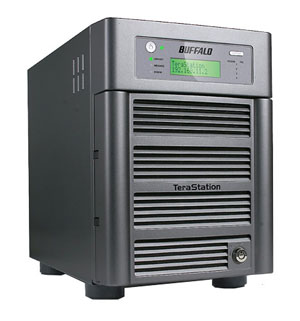 Need more storage? Buy a larger hard drive. Need A LOT more storage? Pick up the new 3TB TeraStation Live (HS-DH3.0TGL/R5) or the 3TB TeraStation Pro II (TS-H3.0TGL/R5) from Buffalo Technology. The network attached storage drives were announced and released today, stamped with a company claim of being the “industry’s fastest single NAS devices in its class on the market today, delivering a high-speed processor for ultra-fast data transfer rates of up to 38MB/s which is comparable to a USB 2.0 hard drive.”

For the unfamiliar, the TeraStation Live (already available in 1TB and 2TB versions) is more for media sharing than simple file storage with its abilities to be used as an iTunes server and now can save pictures and video directly from cameras. The TeraStation Pro II (also in 1TB and 2TB versions) is aimed at SMB and SOHO customers with improved power management and security features.

With an estimated street price of $2,499, they certainly aren’t for everyone. In fact, while I get the SMB demand for the Pro II, I can’t imagine the market for the consumer-friendly 3TB Live NAS drive is a big one, but you know, maybe it’s a “if you build it, they will come” kinda thing.