Inspired by a childhood passion for paper dolls, Scandinavian born Liisa started drawing dolls and accompanying wardrobes, uploading them to Geocities. The personal page grew, evolving to Paperdoll Heaven in 2004.

Now calling itself Stardoll.com, the site took $4 million in Series A funding from Index Ventures in February 2006, and $6 million in a B Series round lead by none other than Sequoia in June the same year.

It’s a rags to riches success story that makes Stardoll worth taking a look at, and the space is seeing hyper growth. See our writeup of Zwinky last week.

Stardoll is all about dressing up dolls online.

Each user is given a page from where they can share the dolls they have created, accompanied with a guest book, diary (blog), friend connections and album.

Most users are girls between the age of 10 to 17 and online safety immediately becomes a consideration. Stardoll adds a layer of anonymity to all accounts. Users can never reveal personal information such as their real name or city of origin on their pages.

In the background is a team that has grown to 40 people based in Stockholm, with a Los Angeles office on its way. Matt Palmer, former EVP of Marketing for Disney’s Kids Network has been hired to lead the North American push.

With its European heritage, languages supported include French, Italian, Spanish, Hungarian and Polish, with a dedicated German .de version recently being launched. 30% of traffic comes from the United States vs. 50-52% from the European Union.

As a destination this won’t appeal to all readers, men in particular working in tech fields, however the numbers speak volumes for their growing success amongst their target demographic. With Sequoia amongst its investors it doesn’t take rocket science to work out that the site looks like a winner.

There’s a positive message as well.

Chasing funding and trying to be the next best thing in Web 2.0 can be hard at times, and even a little depressing. Stardoll shows us that from little things, big things can grow. 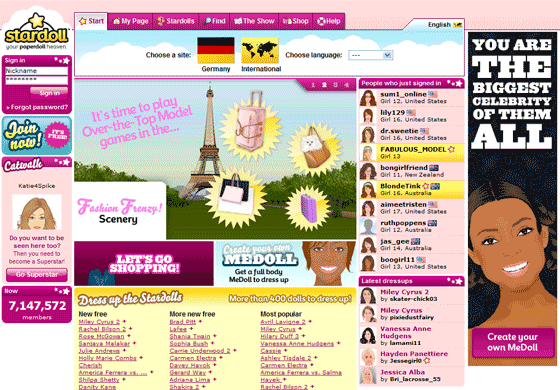