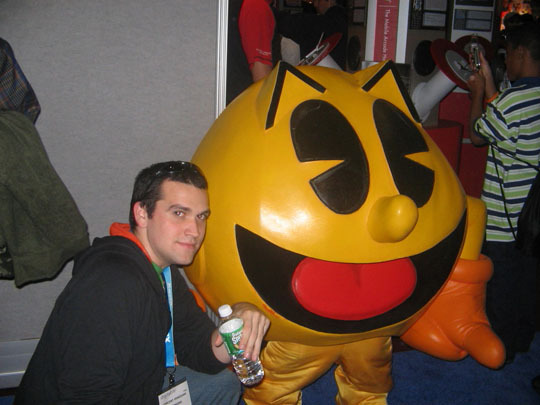 Fans of Inky, Blink, and miscellaneous bouncing fruit should clear their schedules from April 26th to May 9th. Microsoft just announced that a World Pac-Man Tournament will be held on Xbox Live Arcade. That’s right, you can win some prizes and show off your skills from the comfort of that used couch you found on Craigslist. Here are some of the details of the tournament:

A total of nine finalists in the Xbox 360 Pac-Man World Championship will advance to the finals based upon the highest Xbox LIVE Arcade leaderboard scores. There will be one finalist from each of the following countries and geographic areas: Asia, Australia/New Zealand, Canada, Japan and Mexico; and two finalists from Europe and the United States. This group will also be joined by the winner of the Pac-Man FANatic contest, a competition that will encourage Pac-Man fans from the United States and Canada to submit a video that demonstrates why they are the ultimate Pac-Man fan. The winning entry will be flown to New York as a wildcard entrant in the final round of the tournament. Details are available online at http://www.xboxlivetournament.com starting April 25, 2007.

The Xbox 360 Pac-Man World Champion will receive worldwide acclaim from being the first-ever Xbox 360 Pac-Man World Champion and gain a place in gaming history. The winner of the finals will also receive other great prizes, including 26 years of free Quiznos toasted subs (one sandwich a week for 26 years, a $13,520 (U.S.) value), 100,000 Microsoft Points for games, movies and other fun content available on Xbox LIVE, and a one-of-a-kind Xbox 360 featuring a special design inspired by Pac-Man.

A year of free Quiznos subs? Forget the cash, sign me up! The finalists of the tournament will compete in a fierce battle June 5th in NYC, which means CG will most likely be on scene heckling and eating soft pretzels to stay true to the game.