Update: Dave Sifry responds in the comments, saying “I’ll be very clear about it – Technorati isn’t for sale.” Which means, of course, that Technorati is for sale.

Blog search engine Technorati has always been more secretive about itself than most other startups. They won’t comment on venture financings, for example, even to correct incorrect information. So it means something when CEO Dave Sifry comes out and discloses a ton of information about recent page view and unique visitor growth.

Technorati, he says, has had 9 million unique visitors over the last thirty days, up from 3.5 million two months ago (that’s such a dramatic increase as to appear implausible). And while he isn’t disclosing actual page views, he says they increased 53% in March, and 141% over the last three months. Wow.

That’s big growth for the four year old blog search engine. But, why is Technorati suddenly so open with its data?

It could be two reasons. They took a reputation hit in December when Hitwise reported that Google Blogsearch had overtaken them. When Kevin Marks, a key developer, left the company in February to join Google, people started to talk. And Technorati’s investors reportedly started looking for a new CEO. So Sifry might be simply defending his turf by saying “look at how well we are doing.”

A second reason for the report is that Technorati is now serious about getting acquired, and this is a marketing document for would-be suitors.

Either way, data transparency is good. I hope Technorati makes a habit out of posting their internal number.

I also pulled Comscore data to compare to the Hitwise and Quantcast reports that Sifry showed in his post. Comscore also says that Technorati has more unique visitors and page views than Google Blogsearch. Just don’t ask about what happened last June (Technorati was too small at that point for Comscore to properly measure it). 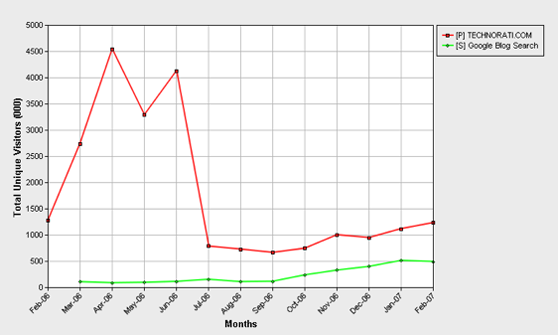 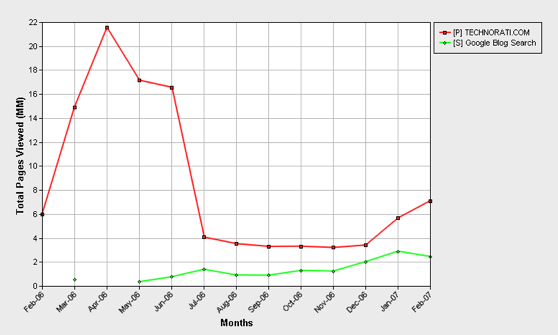