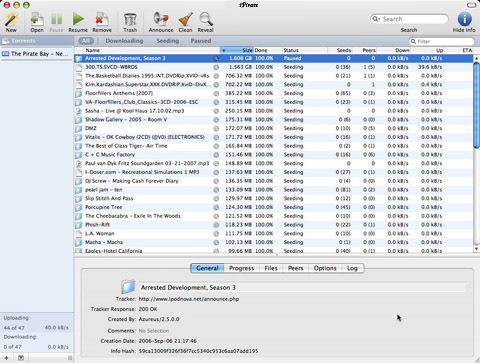 Arrr matey! If it be torrents ye want, look no further than Apple! Jobs & Co. are now supposedly working on an OS X-only Bit Torrent client called iPirate. Still in alpha testing, we obtained this screenshot from an internal Apple employee and we like what we see. Some of the rumored features include built-in private tracker search, Pirate Bay and Mininova RSS feeds, bandwidth limiting, automatic RIAA and MPAA detection to ensure your torrent isn’t bugged (damn those public trackers!), and a beautiful aqua-based UI that won’t lag like Azureus.

No word yet on when Apple is releasing iPirate, but if my cards are right, expect to see iPirate included with OS X Leopard by the end of the year.