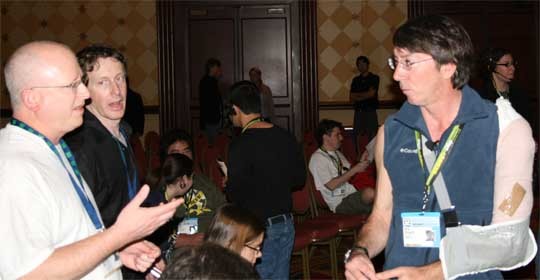 This Just In: Will Wright breaks arm in horrible Sims accident.
Will Wright is about to take the stage for the final keynote of the SXSW Interactive summit. The Hilton ballroom is more packed than I’ve seen it for any of the other keynotes. Hordes of SXSWers of all shapes and sizes. I see everything from fanboys to, well, people who are slightly less fanboyish. Nevertheless, this looks to be a good one.

David Bowie is currently blasting away Major Tom over the PA. Two giant projector screens are displaying images from the Hubble. Some guy is giving introductions now:

2:10 – Will Wright takes the stage. His arm looks massively broken.

2:13 – Wright is discussing the process of storytelling. He explains that storytelling across different mediums take on different arcs. Movies, he says, are more interesting than games because the arcs are more linear than a game.

The reason behind all of this is because Wright believes the best element of storytelling is empathy. People being able to put themselves into the position of the character.

In linear storytelling the director knows the future, so the story leading toward the end can be adapted appropriately to show the tale in the way most relevant to the outcome. Interactive storytelling doesn’t have this luxury because the participant has the ability to affect the story’s progress.

2:25 – Wright is flying through his Powerpoint slides at ridiculous speeds. He is self-confessedly overly caffeinated, so I guess it’s no surprise, but it’s sort of hard to get a good look at some of them.

2:41 – Showing a demo of Spores player tools. It demonstrates the immensity of the game. Wright’s single-cell creature just got eaten by something. He then tried playing as a larger slug creature and was again eaten while trying to eat the babies of a giraffe-looking thing.

The current demonstration is showing the character creation process. It looks quite versatile. Players will have a huge range of options to choose from when selecting character details. The system then analyzes the attributes and animates it appropriately. Cool stuff.

He’s skipped ahead millions of years to a point where his new creature is sentient and has space travel capabilities. The view has expanded to encompass the macroscopic view of the source planet rather than a microscopic view of immediate surroundings. The space ships are cool. Wright envisions immense interstellar wars and interactions.

Wright just demonstrated the ability to kill off a planet. All of the creatures on the planet are dying off because he forces the climate to change and dried up the oceans.

He just created a monolith and threw it down on new planet. Lesser creatures has surrounded it and started to worship it. He’s landed on the planet and has demonstrated the Spore encyclopedia. The idea is to scan all creatures one encounters to log Spore existence in its entirety.

My battery is about to die

The Spore demonstration is over. I’m going to shut down.