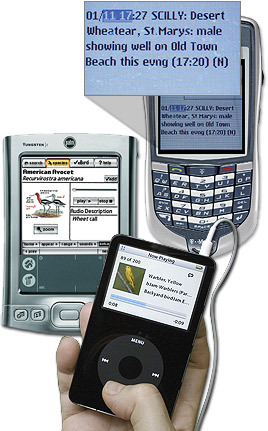 I spotted a front-page story (paid subscription required) in the Wall Street Journal this week about bird watchers who are using portable technology to find birds. Some are using wireless devices like Blackberries to receive bird proximity alerts, while others are using iPods and speakers to mimic bird calls.

The interesting part of the article is the controversy:

One point of contention is the use of mobile technologies that replicate bird songs. MightyJams LLC, in Atlanta, sells an iPod loaded with its BirdJam software and sample songs of 650 birds … The American Birding Association’s code of ethics advises against the tactic for rare or endangered birds because it can distract them from protecting or feeding their young. “It’s a very kind of personal, selfish thing to do,” Audubon’s Mr. Green says.

In addition, cell phones can ring and disturb birds in the wild, and using laser pointers can hurts a bird’s eyes, according to the article.

The curse of technology is that sometimes, it can become more detrimental than useful. What are some other examples of technology that can hurt the very thing it hopes to help?