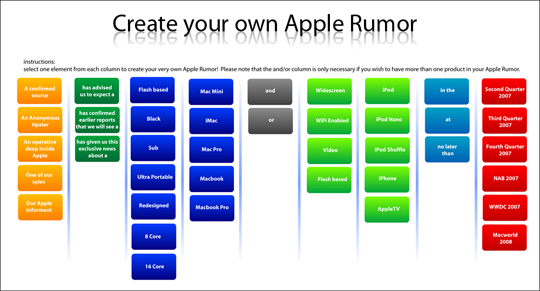 We usually post the Apple rumors that we think are real, but sometimes one or two can slip through the cracks. Now no news is accurate thanks to Apple Gazette’s Apple Rumor Generator! Integrity? Take a hike. Truth? Buzz off. This is unadulterated, full on rumormongering. It works by selecting a piece from each category on the chart shown above. For instance, “A confirmed source has advised us to expect a Black iMac and Flash based AppleTV at WWDC 2007.”

Laughs ahoy, but I foresee Digg’s Apple category becoming incredibly unreliable in the near future. Give a try and have a chuckle whilst we wonder if any future Apple tips will be for real.