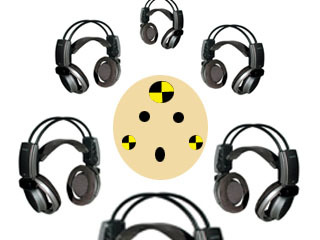 What’s a hard-core gamer or action-movie lover to do about having late-night fragging sessions or Matrix screenings without driving their spouse or neighbors nuts? While there are plenty of consumer 5.1-channel headphones on the market, if you want cans that give you a truly convincing surround-sound listening experience, you’ve got to be a military sonar operator or aircraft pilot. Here’s a dumbed down gracefully simplified explanation of what works and what doesn’t, as well as a bit about how you hear.

Sounds reach our right and left ears at slightly different times, depending on where the sound is coming from and how your head is positioned. The ear that’s closest to the sound source gets the sound first, and the other ear gets the sound slightly later. It’s called interaural time delay, but let’s go with just delay.

Your brain figures out where sounds are coming using a combination of your eyes — seeing the space you’re in — and the way the delay changes as your head moves in relation to the sound. That change is the crucial part — without head movement, you’re not getting accurate info. And believe it or not, even if it seems like you’re keeping still, your head actually shakes (like you’re saying No) subconsciously ever so slightly to give your brain enough info to determine where a sound is coming from.

When you turn your head while wearing headphones, in an aural sense it’s like the entire world is turning with you, so your head may as well not even be moving. Such is not the case with what your eyes see — otherwise you wouldn’t even be aware of turning your head save for the muscular sensation. In other words, commercial 5.1 headphones don’t really do the trick convincingly because they’re affixed to your head and move with you. For surround headphones to be truly immersive, they’d need to compensate for your head’s motion.

Another important element involves the shape of your ears and how they receive sound from every possible angle. I’ll spare you my uber-nerdy lecture on head-related transfer functions (HRTF), but suffice it to say that really fooling your brain into thinking that sounds aren’t coming from right next to your ears would require headphones to do a huge amount of data processing.

You’re probably wondering whether this mindblowingly awesome technology will ever trickle down to us civilians. The short answer is: Everything does eventually. In fact, a few years ago, Sony came out with a set of wireless surround headphones that used a gyro sensor to compensate for head movement. Unfortunately, the surround effects didn’t work much better than other such headphones, and the price was sky high, but the gyro sensor was a really important step.

Naturally, it’s extremely unlikely that we’ll all have access to anechoic chambers for the same kind of customization that the military gets, but plenty of generic profiles exist that will be good enough for general consumers. Companies like LTB, Voyetra, AKG, Sennheiser, and Sony need to get all the components right to bring us into the next generation of home theater and gaming to save us from all the virtualization techniques, which work okay as long as you’ve got your head clamped into place while watching a movie or playing a game. But we all know that’s hard to do when you’re peeping The Fifth Element on your 108-inch LCD TV.