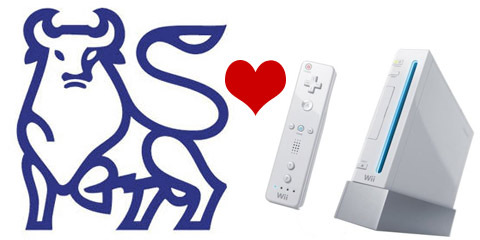 Looks like Merrill Lynch is the latest company to be added to the Nintendo payroll. Analyst Yoshiyuki Kinoshita is now claiming that by the year 2011, 30% of US households will own a Nintendo Wii and a third of Japanese households will own one as well. The predictions come as the Wii has surpassed expected sales and doubts that the console would be gimmicky. Adding fuel to the fire is the fact that the PS3 hasn’t sold near as many units as the Wii, due to shipping limitations.

So 30% of US households, eh? That’s a pretty ambitious claim. Too bad it’s all a bunch of Crap with a capital “C”. Why? For starters, in 2005, the average household income determined by the Census Bureau was $46,326. Let’s say that household has a husband, wife, and child. These people don’t have the money for a Nintendo Wii + some games + a broadband internet connection – they need their money for real expenses like a mortgage payment and cases of Keystone Light.

Don’t give me your silly Japan-speak about how 30% of people in the USA are going to buy a console created by a Japanese company. It’s completely biased! I realize Japan makes all our consoles, and that’s fine, but don’t go predicting sales for us Americans. Maybe when Wii-fever settles and the pandemic ends, people will actually start using logic to calculate projected sales.