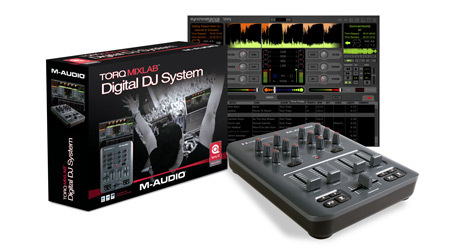 DJing has most certainly evolved over the years. From the infamous Technics 1200s to Numark’s iPod DJ system, the technique of holding the attention of a dance floor required precise musical knowledge, expert mixing skills, and a sixth-sense of beatmatching. After spending just a few days with M-Audio’s Torq Mixlab Digital DJ System, I’m officially declaring that any other form of DJing is obsolete. Why? Keep reading to find out.

I’m not an idiot when it comes to DJing by any means. I’ve DJ’d at clubs, parties, dances, and coffeehouses. I never used CD-based turntables, only two Technics 1200 MKIIs, an Apple G4 Powerbook, and a Rane mixer. With this setup, I was able to DJ pretty well but beatmatching was truly a pain in the ass. With CD DJing, I know it’s much easier but still, you can’t really see what’s going on like you can with vinyl. Basically what I’m trying to convey to you is that I know what the hell I’m talking about.

So in comes M-Audio. I played with the Torq Mixlab setup at CES and after only spending 5 minutes with it, I was impressed. The package itself only costs $129.99 and comes with the Torq LE software, a USB cable, and the XSession Pro MIDI interface that resembles a basic mixer. All for less than the cost of just one Technics 1200 turntable. Those on a budget should seriously consider the Torq Mixlab system.

Hooking up everything and installing it all is about as painless as it gets, but then again, I am using Mac OS X on a G5 iMac. Once you run Torq LE, the DJ software, it scans your hard disk looking for MP3s and checks out iTunes to see what you have configured there. This way, when you start the program up, all your music is right there, including playlists. It’s incredibly intelligent and can handle pretty massive libraries. I have over 90GB of music in iTunes alone (only about 2GB of that are videos) and Torq LE does a fine job browsing through my collection as long as I’m not running a ton of programs. It’ll even scan your iPod if it’s hooked up. 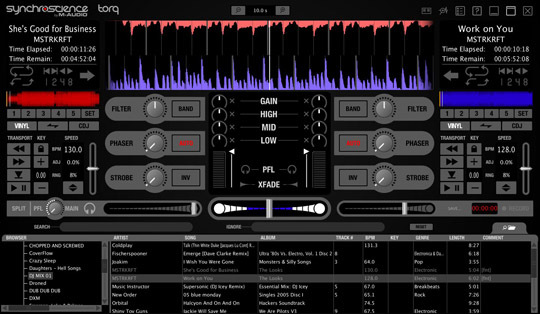 Torq Mixlab has a fantastic UI

Looking at the UI, you’ll see plenty of familiar controls. You have your levels, playback controls, waveforms, effects, faders, and your music library. All you need to do to start playing music is to just drag your MP3 to Side A or Side B and hit play. After this, if you’re a good enough DJ, you can take care of the rest. There’s even a record button for saving your mixes! Though you can’t control your files exactly like vinyl, there’s some other tricks M-Audio has up it’s sleeve…

Let me explain for a second what beatmatching is. If I play some house music with a BPM of 140 and a basic 4/4 beat, I’m going to want to find a similar song to match up with that tempo and time signature. You don’t go mixing Bruce Springsteen into Britney Spears, right? You have to mix and blend the two songs together to create a whole new, original track where the beats are matched up and the songs sound alike. This is beatmatching.

M-Audio has a little arrow on each side where the music’s info is displayed. Clicking this arrow will instantly beatmatch that song to the one currently playing on your other side. This means mixing genres like house, breaks, trance, techno, rap, hip-hop, even rock is incredibly easy. Just click the arrow, get the beats match, and seamlessly start to bring in your new track. For an example of what beatmatching sounds like, check out this file.

The included effects are pretty nice, but are cheesy at times. There’s three to choose from, each with its own dedicated knob per side on the mixer: Filter, Phaser, and Strobe. The filter is a mix of low-pass and high-pass filters that give a certain “fading effect when turned right or left. The phaser is just a phaser that sounds OK, but really isn’t anything special. As for the strobe effect, it’s awesome. Turning the strobe-knob creates a delay effect that can add some action to your mix.

Overall, I’d have to highly recommend the Torq Mixlab system to amateur, professional, and aspiring DJs alike. No matter what your level, this is going to blow you away. It’s the first MP3-based DJing system that actually has done DJing correctly. The software is powerful, yet easy to use and responsive, the hardware is one of the best MIDI controllers for DJing out there, and the features are unchallenged. Rather than bore you with more text, I decided I’d put my money where my mouth is and created a sample DJ mix for your CrunchGear readers. It’s a few minutes long, goes between three different songs, and pretty much demonstrates all the effects and uses of the Torq Mixlab system. Enjoy.