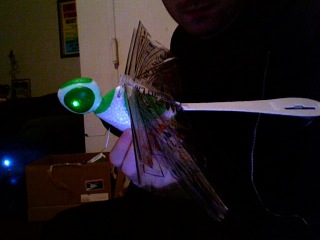 Some background: I tried to assemble and fly a model airplane once and only once. I was about 11, and after one attempt at lift-off, the thing crashed, never to fly again.

So today, when I found a nice new Wowee Flytech Dragonfly (a supposedly easy-to-use Dragonfly-shaped RC flier) in the mail, it was my first attempt at model flight in many a year.

And I was not disappointed. It won’t increase your productivity, but boy is this thing fun.

The first thing you notice when you get your hands on the Dragonfly is how light and flimsy the whole thing feels. The body is basically bug-shaped Styrofoam, and the wings are paper-thin plastic. However, this flimsiness is almost certainly necessary to A) achieve flight, and B) keep it from causing too much destruction when it crashes.

Throw in six AA batteries (yeah, its a lot, so break out that battery charger) and stick them in the remote (which bears a striking resemblance to an Xbox 360 remote). The Dragonfly itself charges by plugging into the remote, which is pretty convenient (and quite travel-friendly.) Once the Dragonfly’s eyes stop blinking, you are ready to fly. And the best part: No assembly required! All you have to do is stick the removable antenna in the remote and it comes completely ready to roll.

I take that back, here’s the best part: Anybody can get this thing flying in literally a minute. Simply hold it up, lightly toss it, and hit the throttle on the remote. Next thing you know, you’ll be steering the Dragonfly around your living room. It is INSANELY easy to use. And when you inevitably crash it into your mirrors and TVs, it will almost certainly cause no damage (again, the thing is very lightweight foam.) I haven’t had a chance to test this thing out over a long period of time, so there’s no telling how many crashes the foam will last for.

So, here’s the overall on it:

The Dragonfly hits in Spring for about $50, and will only be sold at Radio Shack (at least at first.) Hopefully I’ll have some videos up soon.

UPDATE: Check out the T3 video on the thing to see how fun it looks: