Comparing OS X to Windows Vista is a correlation fraught with peril. There is so much to like in each operating system that picking a winner in each category was difficult and bound to get me flamed. What follows is a non-exhaustive examination of OS X Tiger and Vista. Clearly, Leopard is on its way and will change the game considerably, but since Steve hasn’t called to tell us when or where that’s happening, we’re going to work with what we have.

So, without further ado, let the OS X vs. Vista bumfight begin.

UI – This is one we can really sink our teeth into. As we said before, Vista is very attractive and easy to grasp. Whereas OS X still has a number of strangeMac-isms stuck in its craw (red, yellow, and green window buttons, anyone?), Windows is extremely straightforward.

First, I rarely use Finder and instead have taken to using Path Finder, a richer and more information-packed shell. If Vista wins in this case it is in the preview functions available at the bottom of the window. While both operating systems have strikingly similar shells, this simple bar at the bottom saves hours of frustration. Clearly, this can be modified in both OSes, but out of the box this is a big plus for Vista.

Otherwise, the rest of Vista’s improvements are purely aesthetic. I consider Vista “better looking” than OS X at this point, but only in the Aero UI and only at a cosmetic level. Not surprisingly, many of the improvements stop at the application level and it is quite disconcerting to see old applications like Paint show up inside Aero’s fancy glass UI. OS X is an older UI and it now shows. It’s hard to fault Apple’s older standards, but they do have a lot of catching up to do in terms of visual presentation of data.

Security – Here’s a tough one. Which is more secure? The operating system with no known viruses or an operating system built on a platform that, at last count, had five bajillion (this number is based on strict statistics) security holes? That said, Vista is a definitely a step in the right direction. You cannot do anything—run a new program, install a piece of hardware, or blow your nose—without Vista pinging you on it. Vista also includes virus and adware scanners—which some say lock out competitors products—and advanced phishing protection.

Speech Recognition – Hands down, Vista. Voice recognition in OS X is an afterthought at best and cripple-ware at worst . I’m not big on voice recognition, but I do know when someone has gotten it right. 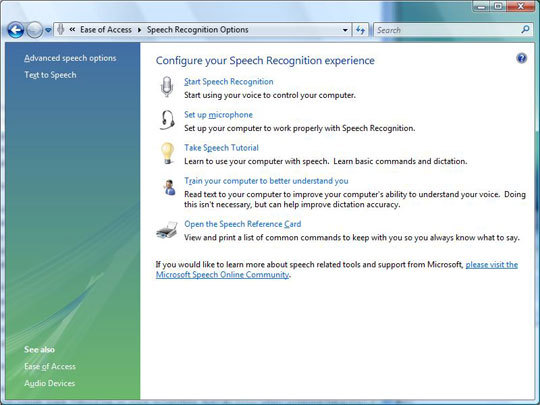 Web Browsing – Internet Explorer 7 is quite nice, but it can’t beat Mozilla on either platform. Whereas both operating systems have had tabbed browsing, through Mozilla, for years, for IE to introduce it this late in the game is a travesty. Out of the box, Safari is considerably quicker and easier to manage than Vista’s icon-heavy IE 7. Thankfully IE 7 has improved phishing detection, but it’s too little too late in this case.

On the other hand, Safari has a lot of problems browsing much of the web. Sites fail to load properly almost by default and as a result. the browser has distinct usability issues .

Multimedia Authoring – Vista is blessed with a very powerful set of media authoring tools that rival or improve on the iLife collection. Vista’s Photo Gallery photo organization tool is considerably approved over XP’s “Ummm… stick them in that folder over there” system of organization while the Movie Maker and DVD Maker applications owe much of their usability to iLife itself. You can easily create multimedia with Vista out of the box.
The Vista Suite – Photo Gallery, MovieMaker, and DVD Maker 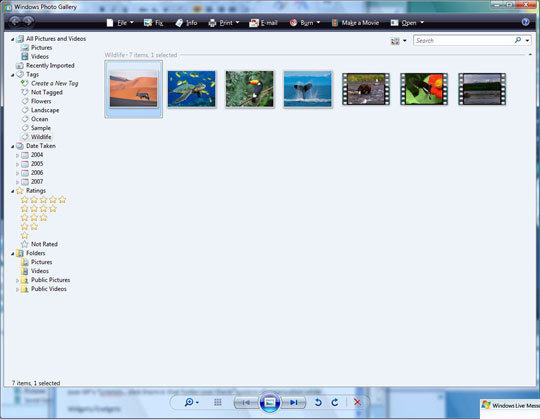 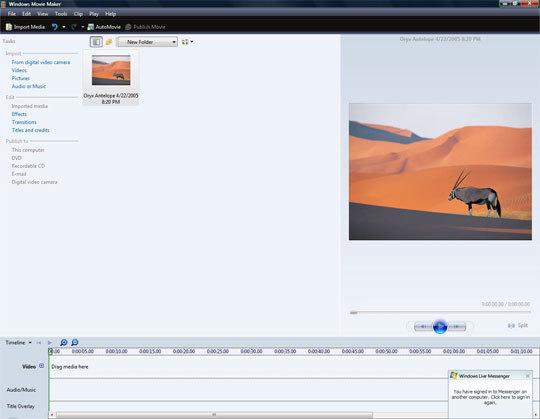 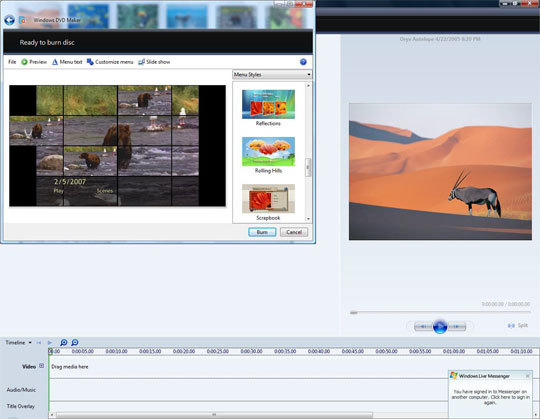 Nevertheless, iLife is still the gold standard for powerful movie and DVD authoring along with intelligent photo browsing and sharing. With iPhoto, you can share photos with other Macs on the network, for example, and iMovie and iDVD are powerful without being overwhelming. I would be comfortable editing professional video using iMovie. I don’t feel the same comfort with Vista’s applications.

Widgets/Gadgets – This is a tough one. Apple’s Widgets are hobbled because they require a single click to enable. Clearly, Vista’s always on sidebar of gadgets is considerably more useful than the OS X Dashboard but the glut of available widgets makes us like OS X a bit better. Again, it is too early to tell, but at this point I prefer Vista’s sidebar over Dashboard. 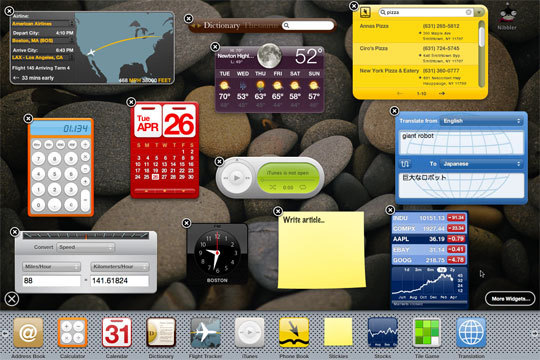 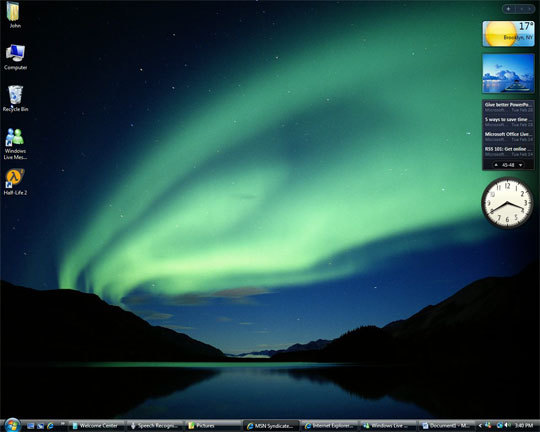 Kernel – Clearly it is difficult to compare as Windows and OS X are built on two divergent technologies that are years old and, in some cases, not very well documented. As a layman and, at least in a current SDK and kernel development sense, a non-programmer, I can only say that OS X is based on a FreeBSD and Mach kernel while Vista is based on NT and its attendant technologies.

Windows has a number of interesting improvements added to its presentation layer as well as its search system. These run neck-and-neck or a close second to XNU (that’s what they call the OS X kernel. Who knew?) One major issue, however, is the graceful mounting and unmounting of external devices. Windows has OS X beat hands down thanks to differences in the file system and the way disk activity is given priority in the kernel. This is a huge pet peeve.

OS X is opaquely open-source while Windows Vista is ostensibly not. While a direct value cannot be placed on either of those two descriptions, fans of Linux will definitely be comfortable with OS X while Windows fans can go years without touching the command line. Both of these operating systems are “graphical” in the broadest sense, which has kept the mass of kernel functionality hidden from the average user.
TIE

Performance – Now we get down to brass tacks. Which operating system “works” better? I’ve used OS X every day for the past two years and used XP regularly before that. On a two year old Pentium 4 machine with an equally aged graphics card, Vista runs like a champ. This is very strange to me and my brain is having difficulties processing it. I have a Mac Pro with two Dual Core Xeon processors and 1GB of DDR2 RAM and the PC is running at about 3.20 GHz. So what is going on here?

Like it or not, operating systems accrue a number of slowdown issues over time. This is a completely fresh Vista install while the Mac Pro has been in constant use for about four months. Does this excuse poor performance on Apple’s part? No, but it does give us pause. If Vista is this peppy out of the box, how peppy will it be once the disk and registry are full of garbage? I can’t answer that right now, but for my money I would say Vista is considerably more impressive, from a productivity standpoint, than this Mac Pro. Would I switch? Probably not—I love everything OS X has to offer. Is Vista a great OS? Yes.

Verdict – In the context of this examination, we see that Vista is currently pouncing all over OS X Tiger in most scenarios. Microsoft has considerably improved its flagship product and should be applauded for taking so many modern operating system concepts and dragging them front and center. That said, what should you buy? Clearly, everyone’s use case is different. As a certified Mac fanboy, I would recommend OS X to anyone who has no interest in experiencing the many negatives that drove me away from XP in the first place, namely weak security and a lack of media authoring tools. Vista is currently in its infancy, however, and the jury is still out on security and ease-of-use over time. If you have to use Windows, use Vista. If you want to join millions of happy Macites, go right ahead. The choice, as they say, is yours.