I have before me a Blackberry Pearl from Cingular and a TeleNav GPS Receiver. Individually, the Pearl is one of the most desirable phones on the market. Packed within its ultra-svelte casing are some genuinely dynamic features.

Although it’s small and attractive, it maintains Blackberry’s acclaimed productivity suite. I’ve used plenty of smartphones and I continue to find something incredibly appealing about Blackberry. It might not have every single feature that WinMo phones have, but what features it has, it does flawlessly and I’m left to wonder whether additional features are truly necessary. Indeed, the Pearl does essentially everything I could ask of it.

One of the few drawbacks of the PEARL is its lack of a QWERTY keyboard—granted that’s also one of its biggest advantages. Nevertheless, the Pearl integrates RIM‘s SureType technology creating the best typing experience I’ve ever experienced with a standard phone keypad. It’s not quite as quick as a QWERTY, but it’s damn close.

My calling experience was extremely positive. It received excellent reception throughout New Orleans and seldom succumbed to interference or dropped call shenanigans.

Perhaps the most distinctive feature of the Pearl is its setup and interface. The phone uses the standard Blackberry screen where all programs and are laid out on the main screen. It’s so incredibly convenient that I question why not all phones are setup like this. There is no need to click through 100 screens just to get somewhere because everything is laid bare in front. The Pearl uses a scroll ball which is a progressive and attractive addition to a device of this nature. The ball reduces time and effort by allowing you to operate the phone quickly with one hand, even permitting you to scroll diagonal through menus and such. Cool stuff.

The other major drawback of the Pearl is that it only has EDGE. I’ve bemoaned and besmeared EDGE on more occasions than I can count and believe its worth every shred of my negativity. I’ve never achieved anything I would consider “mobile broadband” with an EDGE enabled device and this one isn’t really much different. Browsing the web is still utterly slow, but given the sum of all the Pearl’s positives I find difficult to besmirch on account of a sub-par wireless technology. The EDGE actually performed well for email and such, which is what Blackberry’s are mainly about.

was cooler than a service like TeleNav. Consider this a shining testament to my absolutely fallibility. The Drift is a great device, but its GPS functionality really can’t begin to compare to the TeleNav service.

TeleNav uses a small Bluetooth GPS receiver that syncs with your device (in this case the Pearl, though it works with a lot of mobile devices). The receiver will communicate happily with your phone from a bag or pocket.

It seems like something like this would be a lifesaver for the directionally-retarded (my mother). The system allows you to pinpoint locations and to mark favorite locations. What this means is that if you’re standing at a place that you frequent, just call up the TeleNav program and set it as a favorite location. It’ll pinpoint your GPS locale and store it on the phone. Then if you ever want to know how to get to one of your favorite places from someplace else, simply goto the GPS Navigation screen and click on favorites. Select the location you’re trying to get to and after a short compile time, it’ll give you turn-by-turn directions to your favorite location. Exceedingly cool stuff.

As an experiment I allowed TeleNav to guide me to various locations in New Orleans (a city that I could navigate blindfolded). In more than one occasion it was able to reduce my travel time by setting me on streets that I wouldn’t have otherwise taken. Never once did it misdirect me or attempt to send me into the river or something else equally disagreeable.

The device works simply enough. After you’ve subscribed to the service there is a small program that you must download to your mobile phone. You then pair the receiver to your phone via Bluetooth and open the program. The rest is even easier. All of the functions are laid out with obvious buttons and everything functions quite seamlessly. 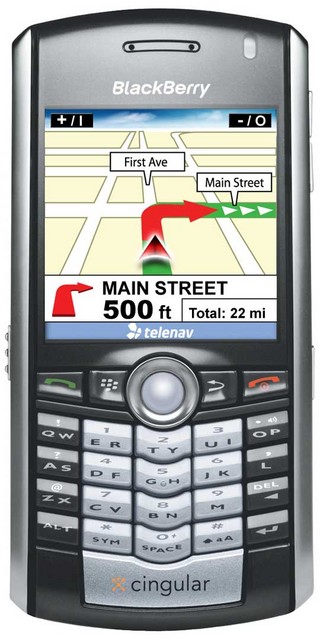 So if it isn’t clear to this point, my experience using the Blackberry Pearl from Cingular and the TeleNav GPS Receiver in tandem was extremely positive. The intuitive device and service make this a winner for essentially anyone. This would be particularly useful for anyone who moves around a city a lot during the day. New Orleans is so small and familiar to me that I’m sure I didn’t realize the full potential of this setup. I’m quite excited to give it a try during one of my forthcoming trips (San Francisco next, then Austin, Chicago, New York, etc.) as I know it will completely change the way I move around those less familiar cities. I plan to follow-up on these devices as I travel, so I’ll give you all some updates in the next month or so.

The Blackberry Pearl is available now through Cingular (and T-Mo) for $199.99 with the standard two year and a $50 mail in rebate—or you can get it for $399.99 outright. The TeleNav GPS Receiver is available through TeleNav and cellular providers for $99. It then requires a monthly subscription. For instance, with Cingular you can get 10 routes a month for $5.99 or, the much better option, unlimited routes for $9.99. Also, if your phone has a built in GPS chip, you don’t have to get the receiver.

Based on the selling-points, ease of use and overall attractiveness and ingenuity of these devices I’m giving them a Best Bytes rating. Quite pleased really.