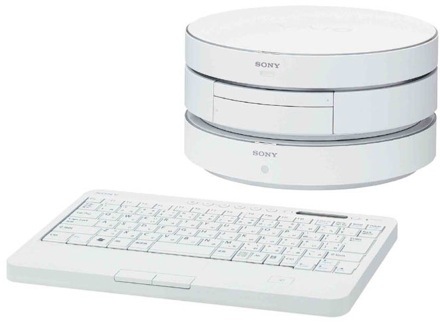 As Biggs and I roamed the floors of CES, we laid eyes on this peculiar looking PC from Sony being featured in some sort of webcast. We headed over to the Sony booth to try to locate it but were unsuccessful.

Our queries to the booth monkeys yielded only looks of bewilderment. Distraught, we returned to the press room where we ripped on Vince for about an hour until it was time to leave.

Nevertheless, our curiosities were still piqued. So props to Engadget for digging this little beastie up.

Turns out it’s actually two new VAIO products, the VGX-TP1 and the VGX-DT1, which link together to form the cleverly titled VGX-TP1DT (AKA Roomba PC). The TP1 (top) cylinder is a Vista Home Premium PC with a 1.66GHz Core 2 Duo CPU. It features 1GB of memory that is expandable up to 2GB and a 160GB hard drive that can be upgraded to 500GB. The unit also features a terrestrial tuner with HDMI, analog RGB and optical digital outputs. Then there are all is all the standard noise like USB Firewire, memory stick and SD slot, and WiFi.

It has an area of just 10.6-inches, making it formidable for home theater environments. If you’re interested, the pair should be available in Nippon soon for about $1,660.