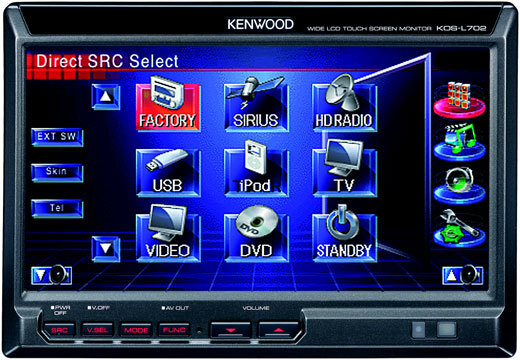 Pimping your ride has always meant upgrading the stereo system, but now Kenwood will make it easier to add components to suit your needs. The company will be expanding their CarPortal product line for 2007, making it practical to upgrade and even add components to a car’s entertainment system. This is part of the Kenwood strategy “To live connected and drive connected.”
To ensure this connection Kenwood is introducing a system built around an external media controller, which is a full-featured audio/video component with multiple connectivity choices. Both the KOS-V1000 and KOS-V500 can be used without replacing the head unit, or modifying the dashboard. The system allows Kenwood dealers to integrate multiple products, and can be used with factory-installed video monitors and even combined with an optional touch-screen monitor, the KOS-L702, a 6.95-inch widescreen on-dash monitor with built-in speaker. The touch-screen allows the user to control the various components via custom Kenwood GUI.
The KOS-V1000 will carry a suggested retail price of $700, while the KOS-V500 has a suggested retail price of $500, and both models will be available in April. The KOS-L702 has a suggested retail price of $500, and will also be available in April.
The KOS-V1000 will work with up to nine external audio/video components while the KOS-V500 will work with up to six additional components; this include a navigation system, video iPod, digital music players, USB drives, HD radio, satellite radio tuners, DVD players and hands-free Bluetooh mobile phone accessory (KCA-BT100, $200).