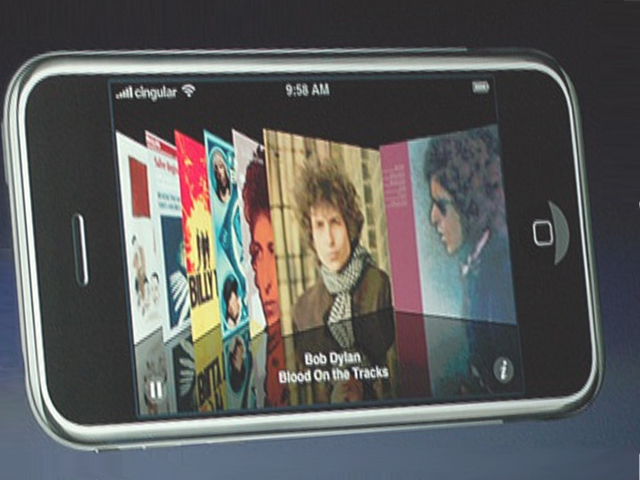 Holy crap! After an unfathomable amount of speculation culminating recently in the release of iPhone products from Linksys, Apple has finally dropped the ball on the holy grail of the tech industry: the Apple iPhone.

The device blends style and functionality into one groundbreaking device. It features a full touchscreen interface and is powered by OS X. It supports Widgets, Safari, Google Maps and iTunes with CoverFlow.

What’s more, it integrates total iPod capabilities, making it the first music phone that people might actually want. My question though, at 11.6-millimeters thick, does it really have enough juice to be a functional phone and media player? Apple is saying it can get 5 hours with talk or video and 16 hours of music, but there is no information as to what happens when users do all of that stuff concurrently.

Anyway, it also features a 2-megapixel camera and some efficient use of iPhoto that could make it a legitimate pocket camera replacement. And for the music there are versions with 4GB and 8GB of NAND storage.

It’ll be available exclusively through Cingular and it only features EDGE, which makes it not appealing at all to me. If, however, you’re not dissuaded by that fact, you can get them this June. The 4GB will be $499 and the 8GB will be $599—both WITH a two year contract.