Wikio, a user-contributed news company, launched Wikio.com, Wikio.de, and Wikio.es at the LeWeb3 conference in Paris today. The three new sites are aimed at the US, Germany, and Spain, respectively.

In April, TechCrunch France writer Ouriel Ohayon reviewed Wikio and found it to be a very comprehensive news generating site. Ohayon became a shareholder in the company after reviewing the site. TechCrunch U.S., however, has no financial affiliation with Wikio. 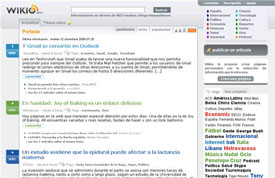 Wikio is a hybrid between user-added and editorial-added news and blogs. They have an editorial staff that ranks and contributes stories but they also allow users to add and rank stories, much like Digg. User voting is balanced with editorial voting and stories are ranked accordingly. Pierre Chappaz, founder of Wikio, developed the site based on his belief that Europe needed a Digg of its own.

“Wikio is the first service of its kind in Europe,” Chappaz said. “Europe is very different than the U.S. In the U.S., you have a large diversity of information services but in Europe, we only have Google News and to a certain extent, Yahoo News. If you look at Technorati, their index is far from being comprehensive. So Wikio is to establish new information in Europe coming from blogs as well as traditional media because we don’t see any reason to put a wall between blogs and traditional media.”

Chappaz said that Wikio.com was developed for the “English-speaking” population, although a UK-version of the site is Wikio’s next project, which will index British media.

“Obviously Wikio.com’s largest market is the U.S. and I would be delighted if Wikio takes a large market share in the U.S. but our main focus is still Europe,” Chappaz said.

One of the main barriers to Wikio becoming a true pan-European service is that there is little interoperability between the countries. You can link to stories from other countries’ Wikio sites, but there is no translation service. Each country has a different ranking algorithm for its stories based on the most popular news sources within that country. So you can search each country individually for news, but you can’t search for global activity.

“It’s difficult because there is a language issue. What we will offer in Wikio in the future is a possibility to search Wikio in all countries but you still have to understand the local language,” Chappaz said.