Yahoo wants you to work for their news site. But you might not get paid.

The company announced on Monday that they would partner with Reuters to solicit public contributions to their news service. The new submission page is live but not yet accepting submissions. 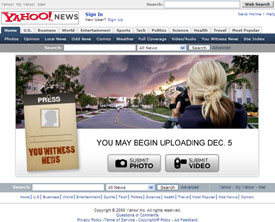 CNN has been accepting public picture and video submissions for quite a while now but it doesn’t seem to be a significant part of their news coverage. It is more of a supplement to professional journalism.

Yahoo’s You Witness news will syndicate the submissions they receive to other news networks. The company is currently developing some sort of compensation method where they will reward users that send in submissions that get used.

“There is already a lot of quality amateur journalism being created by our users,” Scott Moore, head of news and information at Yahoo Media Group, told Reuters. “Yahoo needed a more efficient process for soliciting and publishing user-contributed photos and video.”

Except for the time it takes some poor soul to sift through the crap that they will inevitably receive, Yahoo has little to lose with this news model. As long as they’re just soliciting art and not writing, I’m okay with it.