Azureus will launch Zudeo Monday morning, a content indexing site for finding and sharing large video files. The company told TechCrunch on Friday that they would be partnering with 20 major TV and film studios to provide free programs, although they won’t name the partners just yet.

Azureus is known for their peer-to-peer applications and Zudeo will build off of that, allowing users to share their own content. But it will also allow corporate content providers to publish, showcase, and distribute high resolution, long form content. The company says the focus will be on “high quality DVD and HD content.” Essentially, Zudeo is a hybrid of YouTube’s social sharing and a B-to-C content channel.

“Media companies are embracing digital media distribution,” said Jarl Mohn, current chairman of the board of CNET Networks and an Azureus board member, in a release sent to TechCrunch on Friday. “Zudeo provides a very effective and secure P2P platform to distribute content to their audience.” 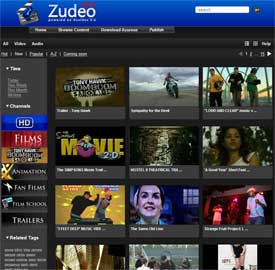 Azureus said that they are trying to “centralize and go viral.” Each listing will have a user rating and an embed code called Azureus Magnet so that users can share the content on other sites.

Azureus also announced a $12 million round of funding by Redpoint Ventures and BV Capital. This is a heap of cash for a video-sharing site if you consider that YouTube was initially financed for approximately $11 million. Azureus CEO Gilles BianRosa told us that the money would go towards marketing and team building.

Currently, Azureus has 15 employees. The company says that they have had 130 million downloads of their client, mostly from SourceForge.net, and are averaging 500,000 more per week. The company claims to have 15 million unique users.

Azureus’ deal with content providers is where they believe they will profit the most.

“Today, content creators and publishers can use Zudeo to freely promote and distribute their digital creations, with no limitation in length or video quality,” BianRosa said. “Furthermore, they can use our social networking tools to expose their content throughout the web, including blogs and social networks. Similarly, movie, games, and music fans can access a growing catalog of high resolution media content and share it with their friends easily.”