A representative for Shawn Fanning called TechCrunch today to make it clear that the social networking site that the Napster founder plans to launch next year will indeed be compliant with World of Warcraft’s (WoW) terms of use.

BusinessWeek reported that Fanning, the founder of Napster and Snocap, is in the development stages for a new social networking site called Rupture. The site will have a WoW plugin so that players can network within Rupture directly from the game.

Early blogging on the subject speculated that Rupture might “run afoul of Warcraft’s terms of use.” Fanning’s representative insists that this isn’t the case and that Rupture is “absolutely consistent with World of Warcraft.”

Rupture will reportedly allow social networking from other games in addition to WoW.

We requested an interview with Fanning but he is not taking them until the site launches, which his rep could only say will be in the first half of next year. For now, visitors to the site can request additional information when it becomes available by providing their email, guild, and realm. Fanning told BusinessWeek he raised capital for the site from a group of investors including Ron Conway and Joi Ito. 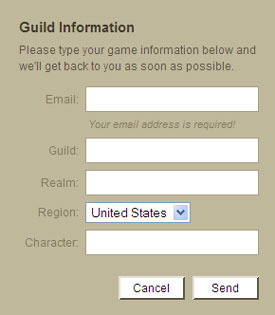