Yahoo! is getting in on the group text messaging biz with the launch of their new site, Mixd. TechCrunch was tipped off to the site’s existence today but we have not been able to determine how long it has been live.

Mixd allows users to set up groups and text or share photos within those groups. Texts and photos can be managed online as well as on a mobile phone. 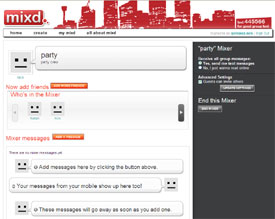 Text recipients can reply to all, “whisper” by replying to just one other person, or “mute” by turning off the message chain. But judging from some initial testing, all of those functionalities are not the easiest things to figure out. It’s simple enough to sign up for the service but difficult to manage contacts, groups, and the numbers assigned to groups and commands. Yahoo! tries to simplify things by asking users to text a number instead of a word, which I’m not sure makes things simpler.

It looks like Yahoo! is going for the “cool” angle on this one. The “About” page says, “Mixd is about going out. Coordinate last-minute meetups, share pictures and videos from your phone, and remember last night on a website we create for you, automatically.”

We have had our eye on several group SMS services lately such as Zemble, Dodgeball, and Twitter. It is a little surprising that Yahoo! wants in on this game but then again, why not?

So far this service is only available to US phone numbers. Regular text messaging fees apply.

Thanks to Noah Kagan to tipping us off about this new site.