DailyStrength is a new social network that provides a space for people with a wide variety of medical, psychological and life conditions to discuss their struggles and the treatments they are undergoing. While any number of wannabe social networks are likely to spring up in coming years seeking to cash in on medical activity online, this isn’t one of those. DailyStrength has the executive team and feature set to be a real player. I think it’s a great example of a niche social network that provides topical value ads and executes the basics well too.

The site was founded by Doug Hirsch, one of the first employees at Yahoo! and most recently at Facebook. The site’s look and feel is somewhat similar to both of those companies’ products. Hirsch says that most niche social networks pick an audience, but people online are mostly concerned with sex, money and their health. He says that health networking is a vastly under served market.

DailyStrength uses the term “community” where some people might use “condition,” and that could be appreciated by people who don’t care for experiences like blindness or deafness being referred to as a disease. Note too that the site uses the word “preview” instead of Beta. I know some people will like that.

The highlight of DailyStrength is that users are asked to describe medical and psychological treatments they have undergone. They indicate what conditions those treatments were for, whether they were effective and provide a narrative about the experience. That information is then aggregated by condition and treatment – so it’s easy to see what a large number of people have done in response to a condition or what it’s really like to undergo a certain treatment. Some communities are better populated so far than others, the erectile dysfunction community for example doesn’t have anyone in it yet (in case you were wondering).

Have you been thinking about using Lexapro? Out of 58 people who have used it on DailyStrength, only 45% found it helpful. That’s interesting information, presuming the complainers aren’t employees of a competing drug company or PR firm.

The discussion and support function is likely to prove quite valuable to users as well. I know from talking to my friend Nancy White about the March of Dimes project she helped set up called Share Your Story that medical social networking and blogging can be a huge success.

There are 25,000 treatments in the database so far. Each treatment and condition has a discussion space, syndicated Yahoo! news and an excerpt from the Wikipedia entry on the subject. The company pays four medical doctors to participate on the site and DailyStrength is careful to advise against or delete medical recommendations posted by users. Hirsch told me that many doctors he’s spoken with are fully supportive of the site as it’s a way for patients to educate themselves before and after visiting a medical office. The site also has a resources section where you can find, for example, a long list of user contributed recipes for gluten free food.

There’s already a fair amount of activity on the site, lots of people offering each other support. The site is primarily targeting women, Hirsch says that seeing 75% of Facebook’s traffic come from women taught him that was the prime audience for social networks.

In the coming weeks the company will be partnering with third party services to offer chat, video and better photo sharing. Ad revenues will be split between DailyStrength and condition specific charities that will be voted on by users. Hirsch says he’s on the fence about big pharma and will likely focus on seeking ad dollars from more “wellness” oriented advertisers.

Everyone says that women, health, community and informational resources are important factors in the future of the web – of course women are more than just a consumer market, hopefully they can be equal participants in building the new web. I think that DailyStrength is a well constructed and useful site engaging with those market segments. 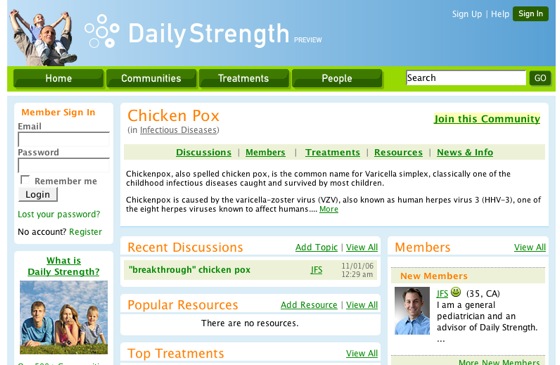