API management service Mashery has come out of stealth mode tonight and is now offering documentation support, community management and access control for companies wishing to offer public or private APIs. This is an exciting launch.

An API, or Application Program Interface, is the interface that allows developers to leverage some one else’s data or functionality to create mashups. The discourse around data sharing and collaboration has largely moved beyond urging companies to offer APIs – now the task at hand is to make the offering of quality APIs easy. That’s what Mashery offers as a service.

Mashery was founded by former Feedster team members Oren Michaels, Kirsten Spoljaric, Clay Loveless and Scott Rafer. Rafer is also the CEO of MyBlogLog (our coverage). The company was incorporated in May and received under $1 million in backing in June. Investors include Josh Kopelman, Jeff Clavier, Rajeev Motwani, Ron Conway, Ariel Poler, Dave McClure, David Rose, and Scott Kurnit. Kopelman, of First Round Capital, is the lead investor and chairman.

The future is going to be built out of APIs – though still controversial in some quarters today, in time they will be as common as corporate web sites are now. Who’s going to build the series of tubes that makes such a future possible? Mashery is aiming to get into that game early.

There’s a broad spectrum of mashup infrastructure service providers already emerging. Companies like Widgetbox let consumers easily mashup data and applications into their existing websites (see also tomorrow’s SpringWidgets), Teqlo and Ning are the next step up in complexity and StrikeIron targets the enterprise market (specifically the part of it that uses the acronym SOA a lot). Mashery is aimed at companies that already recognize the importance of APIs and developer community but want to save money and time by paying some one else to set up the support infrastructure and do it right. It has a different feel to it than StrikeIron, visiting the two companies’ sites will make some differences quickly apparent.

Thankfully, Mashery emphasizes throughout their site that users own all of their own data and can easily export it at any time. That data is stored and processed with Amazon’s S3 storage and EC2 elastic compute cloud. Thus scaling up quickly and affordably will always be an option for Mashery. This is a striking example of the kind of company commoditized storage and processing in the cloud make possible.

A free account with Mashery includes a wiki to annotate API documentation, a developer’s blog and forum – all with moderation, administrative control and your company’s branding down to the CSS. It feels to me like Basecamp for APIs. A full list of free features can be found on the site.

A Pro account includes metrics to track use, developer registration, key issuance and access management. In the near term future, Pro accounts will include support for payment processing for commercial APIs.

The company says that Pro accounts for a typical API and community will cost between $10k and $20k per year. They emphasize that this cost is much lower than even a single employee managing the project and doing continuing technology development.

The first APIs that developers can connect with in Mashery are the open source business search solution Baynote and the website personalization service Loomia.

I’m not a developer myself so Mashery’s service quality and performance isn’t within my abilities to review, but I do know that this is a startup that is emblematic of the direction that the best of the web is going.

APIs changing under the feet of developers building on top of them is a significant problem and providing an easy way to annotate documentation should prove very useful to developers. Security and easy access control are two of the biggest concerns that companies considering an API consider. If Mashery can prove an effective service provider in alleviating these kinds of concerns for their customers and the development community then they are going to be a key force in the realization of a future built of mashups. 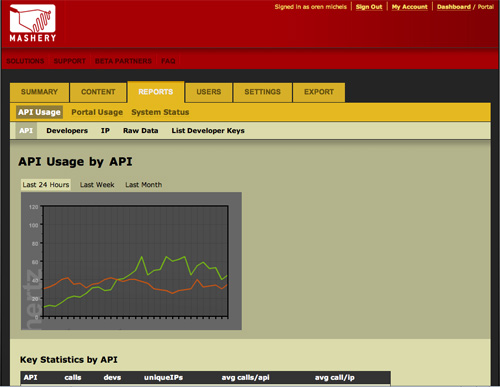