AOL Video announced the addition of movies from Paramount Pictures today, adding to their catalog of films from Fox, Sony, Universal and Warner Bros. They now offer more than 300 titles from major movie studios.

We wrote about the major movie download services (CinemaNow, MovieLink, GUBA, Amazon Unbox and iTunes) last week. AOL Video offers a number of services beyond the sale of premium movies (including full web video search care of their Truveo acquisition). Putting those features aside, we’ve compared AOL Video to the other major services. The product is average compared to the others, although prices are on the high side and the movie selection is near the bottom of the list. AOL certainly hasn’t created a standout product yet.

To be more specific (refer to chart in previous comparison post): AOL’s 300 titles is next to last on the list (iTunes has the smallest library, MovieLink has the most with 2,000 titles). Their pricing is on the high side, topping out at $19.99 for new releases. And they don’t offer lower priced movie rentals (all of the other services, except iTunes, offer rentals). Unlike CinemaNow and (soon) MovieLink, AOL does not offer a “burn to dvd” feature.

iTunes is the only service accessible by Mac users. All of the rest require a Windows machine, and most require the use of Internet Explorer as well to download the movies. When it comes to depth of movie catalog, MovieLink is far ahead of the others with over 2,000 titles. Guba has the lowest pricing.

For non-bittorent users, we continue to recommend iTunes for Mac users (their only choice), Guba for pricing (they subsidize movie prices to below cost) and MovieLink for selection. AOL isn’t a standout in any category, and every movie they have in their catalog is also offered by CinemaNow, MovieLink and Amazon Unbox.

A chart showing online distribution deals for each major studio is below. 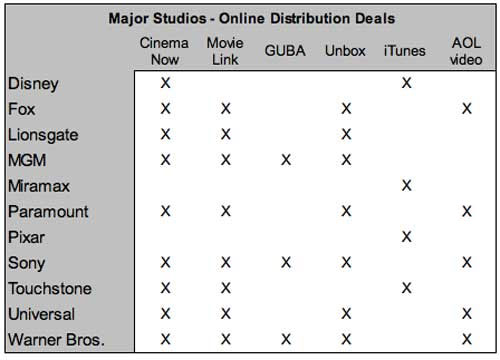