We started testing the various movie download services earlier this summer when rumors of Apple’s new movie download store first heated up. We’re now regular customers of three of the services. Michael Arrington is an iTunes junkie because he likes having movies and music videos on his iPod, Nik Cubrilovic likes Movielink and I’m hooked on Guba’s very low prices. For those of you considering ditching the Netflix account or the weekly trip to Blockbuster and downloading movies instead, one of these might be just what you’re looking for.

If you are a Mac user, the choice is easy. Only iTunes will work on your platform. If you are on a PC you can try any of the services below, which include CinemaNow, Movielink, Guba, Amazon Unbox and iTunes. Note, however, that you’ll be forced to use Internet Explorer to download these movies unless you use iTunes or Amazon Unbox.

DRM is a big part of all of these products. Make sure you read the terms and conditions carefully before agreeing. At least for Amazon Unbox, the terms are somewhat draconian. DRM will keep many users away who’d like the ability to burn movies to DVD, transfer to other computers, etc. These users will simply purchase and rip DVDs directly (removing DRM), or use bittorent to acquire movies.

More on each below.

Since branching out from their Usenet product through a deal to sell Waner Bros. movies in June and Sony movies in July, GUBA has mainly been competing on price and referral fees for recommending more users to the site. GUBA also features user-generated and usenet videos for free alongside premium movies users can buy or rent. Usenet movies can be downloaded in iPod and PSP formats as well.

CinemaNow’s most recent claim to fame has been their release of “Too Fast Too Furious” online at the same time as the DVD release, an industry first. They also have a Burn-to-DVD feature that allows you to burn a DVD playable on almost any DVD player for select titles. CinemaNow provides movies from Disney, Fox, Lionsgate, NBC Universal, Sony, and Warner Bros. Like most of the others, CinemaNow requires users to have a Windows PC and use Internet Explorer.

Formed out of a joint venture between major movie studios, Movielink has by far the largest catalog of new release and library titles. Their major partners include MGM, Paramount, Sony, Universal, Warner Brothers, Disney, Sundance Channel, BBC, and National Geographic. While not as consistently low priced as GUBA, if you look closely enough you can find various discounts for military personnel, college students, and mystery rentals. We go to Movielink first when looking for a movie because they have the deepest catalog.

As expected, iTunes launched their movie download service back in September. It features Disney movies and managed over one million dollars in sales during its first week. iTunes 7 has been criticized for the buggy 7.0 release corrected with 7.0.1, but nothing seems to be stopping the iTunes juggernaut. Our guess is that Apple will successfully bring on additional studios in the near future.

Look for studios to ink multiple deals with a number of services, and for there to be little difference in offerings or pricing over the medium term. Walmart and others will also be launching their own services, possibly with in-store DVD burning kiosks as well. As download services become more popular, the large DVD retailers, particularly Walmart and Target, will continue to push for lower wholesale DVD prices as well. Hopefully, competition from these various services and products will ultimately push consumer prices down.

The following chart sets forth additional comparison information about the services: 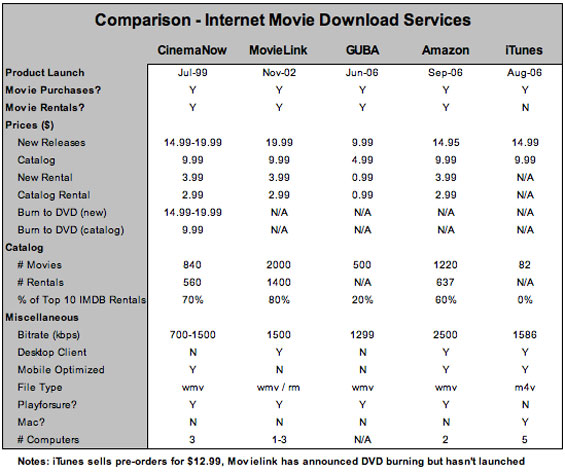 Our recommendations: If you are on a Mac, your only choice is iTunes. For Windows users, Movielink has the deepest catalog, and Guba has the best pricing (they are actually taking a loss on sales). CinemaNow has an outrageously priced burn-to-DVD product that may be attractive to some users (although simply buying the DVD seems to make a lot more sense).

Additional notes: All services except iTunes had rental agreements allowing users to rent a movie for 24hrs from pressing play or 30 days, whichever comes first. The number of movies in catalogs were taken either from company numbers or number of movies accessible on the site (these numbers fluctuate). The top 10 movie rentals drawn from IMDB data were: “The Sentinel”, “Take the Lead”, “Poseidon”, “Friends with Money”, “RV”, “Inside Man”, “Akeelah and the Bee”, “Scary Movie 4”, “Silent Hill”, and “Just My Luck”.

When trying out the services, I found the $0.99 rental from GUBA to be the best choice. It was cheap enough that I didn’t mind spending the time downloading a movie and deleting it after I was finished. Renting from the other services just didn’t seem a fair deal at $2.99 or $3.99 with Blockbuster down the street and Netflix in my mailbox. I can’t believe that most of these services expect me to pay the DVD price for a movie that hogs my hard drive, comes with a highly restrictive license, and sucks up my bandwidth for 1-2 hours of downloading. However, in the long run I choose iTunes as the service to watch. Their catalog is a lot smaller than the other services, but they offer the most value with their digital movies by easily integrating with my iPod and granting me more licenses. For now, I think I’ll continue using DVDs to archive my favorite movies, but rent digital versions of the ones I just want to see once. What I’d really like to see in this category is a digital Netflix service that automatically rents, downloads, and deletes movies from my computer for a flat monthly fee.