Massachusetts based Helium launched its user generated article database yesterday and combines original writing with user rankings and profit sharing. It’s an interesting model that’s more compelling that proved more compelling than I thought it would once I started using it. The site is fun to use.

I should disclose that Helium is a sponsor for the upcoming TechCrunch New York Party, though to be honest I wasn’t going to write about them after the site was heavily criticized on Digg yesterday for the quality of the writing. After using it myself though I’ve decided that it’s got more potential than I thought it might. The group rating system in particular could take care of the fact that the site is currently dominated by short, unhelpful text obviously written by people for whom English is a second language. Quality content is already starting to rise to the top.

It’s not expert vetted, for that you’ll have to go to the mainstream media or Citizendium, and it’s not collaboratively written like Wikipedia. It’s not crazy (in a nice way) like Squidoo. It is collaboratively edited in a unique and compelling way.

Here’s how it works. Users are asked to write articles on topics from 25 categories and many subcategories, starting with nothing but a subject line. After writing one article, users are taken to a page to rank other articles in the topic area they just wrote about. Two articles written by other users but with user names removed are placed side by side and the reader is asked which is a better article. Any number of articles can be compared two at a time on a continuum (“article A is much better, or a little better than article B” for example). The best articles are then displayed on the category’s front page, followed by related articles in order of reader ranking. 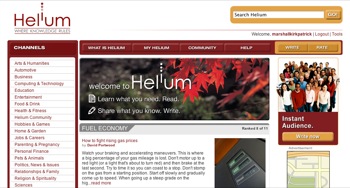 Users can check the status of their articles – mine on “The best providers for internet phone calls” is currently at #11 out of 21 on the topic. It’s not clear what the revenue split on ads surrounding an author’s content is, but you can monitor your earnings and request payment by PayPal when you hit $25. You can also subscribe to the top articles on any topic by RSS.

Each author has a space to provide information about themselves, followed by a list of all the articles they have written and their rankings on that topic. It’s a well constructed site, if heavy on the ads.

Helium takes up a number of different trends we’re seeing around the web, the aggregate one click ranking reminds me of the Google Image Labeler (a game to build search metadata for images) and paying top users for content creation is clearly something many people are interested in. Question and Answer sites are proliferating rapidly, but the structured topics of Helium have a different appeal.

I think this has some real potential. It’s fun to click through sets of articles and click to rank them. If the ad revenue split is satisfying I can imagine some people jumping ship from places like shill central (PayPerPost) and taking up writing at a site with feedback, community and honesty about writers getting paid.