Husband and wife team Edwin Ong and Alex Vikati first met at Stanford, and then founded a company together called Filefish in 1999. They raised $4.6 million in venture funding in 2000, and the company was acquired by Oracle in 2003.

Now they are preparing to launch their second company, CastTV. It is an ambitious effort focused entirely on video search. And that’s not a bad place to be. As we’ve recently written, rich media search is a very hard problem to solve.

A notable success in video search is Truveo, which launched in 2005 and was acquired by AOL in early 2006 for an estimated $50 million or more. Truveo had a unique way of searching video content. First, finding video can be hard, and Truveo does a good job of locating video on indexed web pages. Second, Truveo looks at text surrounding video links, as well as metadata included in the video file itself, and makes intelligent assumptions about the video.

CastTV is taking many of the successes of Truveo and building on them. Search itself is significantly better than any other video search we’ve seen, and the user interface, which includes really smart filters (more on that below), makes it easier to find what you’re looking for, fast.

Edwin and Alex won’t disclose all of the technology behind the service, but part of the trick is that they are able to track videos through multiple links on a site, collecting metadata along the way. And they also parse the code on the video files as well, gathering additional information about the content. If tags are available for the videos (such as YouTube tags), these are indexed as well. The final step is actually even more interesting – CastTV will take the data they are able to collect about a video and search the web in general for additional data. If there’s a close enough match, CastTV adds that information to the content metadata. And unlike other video search tools, CastTV indexes movies and shows from iTunes and other for-pay services.

All of this doesn’t mean much unless the search performs well. In tests I was able to find full versions of movies and tv shows that simply didn’t show up in Yahoo, Google or Truveo search. A free episode of 24 at a Myspace Burger King page. Full versions of Pirates of the Caribbean 2 with price comparisons ($14.99 at CinemaNow, $9.99 at iTunes), as well as available formats (WMV and Quicktime). Searches for trailers, movie and show clips, and user generated stuff all yielded equally impressive results.

Results can be sorted by shows (to weed out non-relevant stuff), host (such as itunes, CBS Innertube, etc to focus on a favorite service provider), by date, relevance, prices, etc.

Look for CastTV to launch sometime in the Fall, and in my opinion be acquired shortly thereafter. In the meantime you can sign up on their home page to be emailed when they launch. If you’d like to see founder Alex Vikati demo the product in person, make sure to attend Jeff Clavier’s Search SIG event next week in Silicon Valley. She’ll be there, along with other hot video startups. 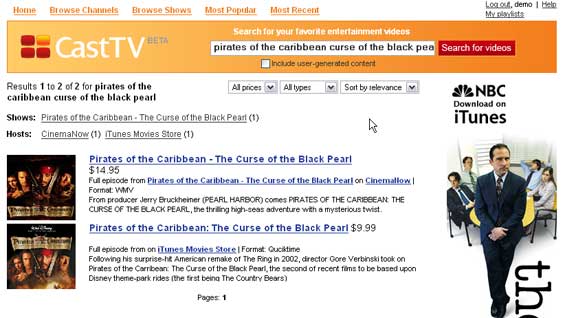 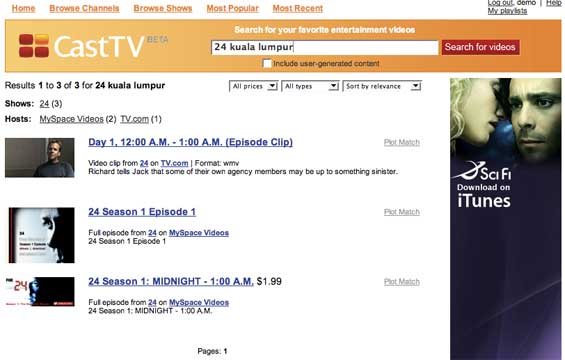