Citizenbay is a city centered citizen journalism project that will pay users whose contributions are voted the ten best by readers each day in 60 cities around the US and France. Set to launch late this month, it’s a project of New York based Oleg Tscheltzoff. Tscheltzoff says his stock photo service Fotolia (which Mike Arrington has reviewed positively) proves the “micropayments for content” model can work. Tscheltzoff’s Fotolia contains more than one and a quarter million photos after a year in operation.

Years after it’s grown passé to say the web makes the world smaller, there’s now a strong case to be made for the importance of local information on the web. (See the big guys fighting over local search.) Citizenbay is a well constructed site that looks like it could make a good run on the local social news milieu. That space could quickly become very crowded, though, and it’s hard to feel too confident in any new site of this type. Citizenbay is currently accepting emails for notification of launch in the coming weeks.

Contributors will be paid between $1 and $5 per original article voted by readers into the top ten each day for each city, users who submit articles they did not write will receive $1 each time a submission makes it into the daily top 10 for their city. It may not be professional journalism, but it could be a nice little chunk of change for top users. It beats some of the AdSense sharing schemes I’ve seen lately.

South Korea’s OhMyNews is probably the best example of a site that pays users to contribute news coverage, but it’s not an unusual approach. Citizenbay stands out for its integration of many media types into one site. The site has a partnership for example with one of France’s biggest YouTube clones, DailyMotion, to have video submissions automatically cross posted to the video sharing site with city names as tags.

Citizenbay combines user submitted text, photos, video and audio displayed in an ajax rich social network style with sections for news, classified ads and coupons and local events. There’s also a duplicate story filter. Tscheltzoff believes that localized ads will be able to command a higher than normal CPM and he’s got some cash left over from selling his French web hosting company to finance the compensation of users until the site takes off. The site will also charge for some classified ads if it picks up enough steam.

Users can easily subscribe to news channels by location, topic or author. All of this makes sense and the site is relatively pleasing to navigate and use – but I can’t help but think that it will need something else to succeed. The partnership with France’s DailyMotion could be a big help; perhaps if Citizenbay could find a similar partner in the US it’s chances of success would be increased. 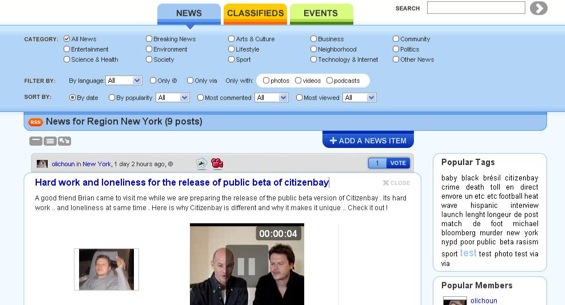