The multimedia and user-generated online atlas service Platial will announce a new live offering called Today Nearby at the Where 2.0 conference starting tomorrow. The new service will combine RSS feeds of news, photos, videos, events and places with Google Maps and Google Earth. Content will be mapped from Reuters, Flickr, Eventful, YouTube and other users’ maps. Updates to locations of your choice will also be available for subscription.

Platial is one of a number of services that allow users to easily create their own maps on top of Google’s API, but it’s notable for its rapid adoption and financial backing. The company says that Platial hosted 200,000 place maps in 300 cities in its first 5 months since launch. See, for example, Public Biofuel Stations (surprisingly, all East Coast US) or this guy’s Hopeless Romantic Map, chronicling a world’s worth of personal heartbreak, apparently over one woman.

Platial’s newest service makes sophisticated, if logical use of RSS feeds from a wide variety of sources. Leveraging so many syndicated multimedia sources could position Platial well in a field that includes competitors such as Wayfaring, CommunityWalk, Frappr and others. Each of these services has a unique feature set, but display of multimedia and news from off site is particularly compelling.

That will be even more true if users are able in the future to layer selected feeds over their own created maps or make some other creative integration of this new offering with the basic Platial service. The Today Nearby service seems to act primarily as a secondary offering beyond map creation; it will be used for monitoring place-based multimedia, events and maps made by Platial users who are concerned with the same locations you are. 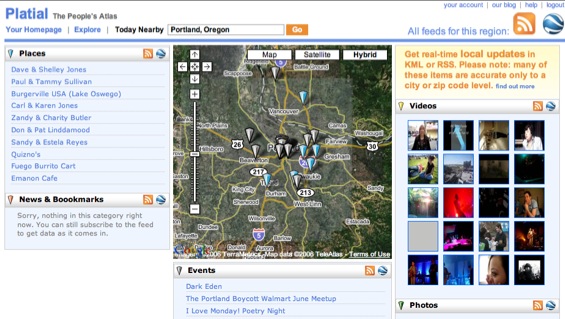