Wikipedia has been around for over 5 years, is the largest wiki (by far) and serves over 400 million page views per month (to compare, USA Today has about 300 million).

Wikipedia is a free, online, user-written encyclopedia in wiki format that was created in 2001 by Larry Sanger and Jimmy Wales. It has grown at an astonishing rate and now includes 1.6 million articles. More than 600,000 of these are in English, more than 250,000 in German, and more than 100,000 each in Japanese and French (wikipedia has editions in 205 languages, 92 of which are active).

Many people don’t realize how easy it is for anyone to add content to wikipedia (I’ve done it several times). Each month, thousands of individuals add content to the project.

We are writing about it today because it became the most comprehensive and most reliable center of knowledge as information became available about the London bombings on July 7. We posted about the attacks here, and noted in last weeks Web 2.0 wrapup that while the BBC and other news sites couldn’t keep up, wikipedia marched along without a hiccup and kept the world informed. Clay Shirky spoke about it, and Jim Phelps picked it up here:

“Whenever there is a really major disaster but no immediate news, the people on cable are often vamping because they have to keep repeating the basic story on the chance that someone has just tuned in even in the absence of any new information. Wikipedia solves that problem while, at the same time, having a symbiotic relationship with those news outlets because it points people to the written form of stories”

For many of us, we started to fully understand the tremendous power of wikipedia as a cultural/knowledge aggregator on July 7, 2005.

A Wiki is a web application that allows users to add content, as on an Internet forum, but also allows anyone to edit the content. The first wiki was the Portland Pattern Repository, created on March 25, 1995 by Ward Cunningham.

A defining characteristic of wiki technology is the ease with which pages can be created and updated. Generally, there is no review before modifications are accepted. Wikis generally practice the philosophy of making it easy to correct mistakes, rather than making it difficult to make them.

The name is based on the Hawaiian term wiki wiki, meaning “quick” or “informal”. It is used commonly in Hawaii as part of the Hawaiian Pidgin language. 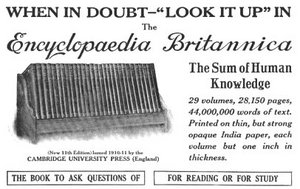 An encyclopedia is a written compendium of knowledge. An excellent summary can be found here, at wikipedia:

“The idea of collecting all of the world’s knowledge within arm’s reach under a single roof goes back to the ancient Library of Alexandria and Pergamon. Many writers of antiquity (such as Aristotle) attempted to write comprehensively about all human knowledge.”

“Traditional encyclopedias are written by a number of employed text writers, usually people with an academic degree.”

Today, most encyclopedias offer content online and charge a subscription fee for content ranging up to about $100 per year.

How is Wikipedia different (and better)?

Wikipedia combines wikis, which are aggregations of content created by users, and the idea of an encyclopedia. To summarize it further would be foolish – we cannot compete with tens of thousands of editors at wikipedia. See their entry for wikipedia here.

At its core, wikipedia offers conent on a vast array of subjects (like web 2.0), and offers additional features such as a discussion forum for each item, editing tools to add content, and a page showing historical revisions to the text.

Samuel Klein writes a beautiful post summarizing our thoughts exactly on what Wikipedia is, was and will become here.

There are certainly problems with wikipedia, but these problems are inherent in the structure of wikis (when everyone can write, some people write crap). But it is tremendously resilient and self-healing, and an extremely important asset to the Internet culture.